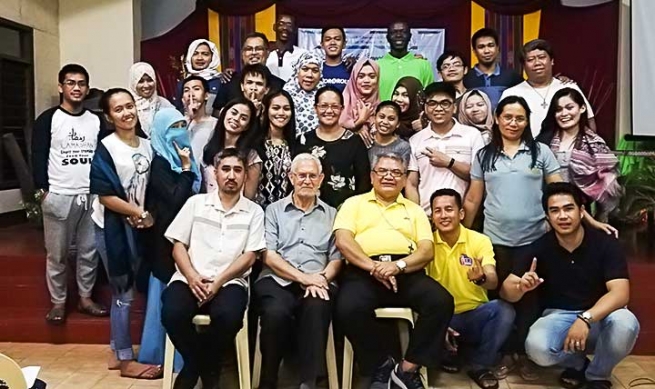 (ANS - Zamboanga City) - Fr Eugene Maclasang, Delegate for Pakistan, and Fr Arvin Abatayao, Delegate for Mission Animation of the South Philippines Province, spent two weeks (1-15 July) in Zamboanga City, on the island of Mindanao - where the majority of the population is of Islamic faith - to participate in the second edition of the "Silsilah" Special Islamic-Christian Dialogue Program, under the theme: "Christianity and Islam at the crossroads."

Silsilah is an Arabic word meaning chain, tie or connection, chosen by the priest of the Pontifical Institute for Foreign Missions (PIME) Fr Sebastiano d’Ambra, founder of the movement for dialogue between Christians and Muslims (1984). This second appointment of Silsilah brought together 31 people, men and women, 16 Muslims and 15 Christians, helping each to learn more about their own faith and the faith of others.

On Tuesday, 2 July, the long series of conferences on the theme of meeting or the encounter began, which lasted until Thursday 11 July. The work in class alternated with two weekends of reciprocal full immersion: Muslims in Christian families and Christians in Muslim families.

"During the seminar we had many and dynamic exchanges with our Muslim co-participants: we shared our reflections with ease during meals and breaks, prepared the cultural presentations together, as well as various reports," says Fr Maclasang. These moments between one lesson and another contributed much to reducing or eliminating mutual prejudices. And despite the differences on so many issues or aspects, a common point was found in the common conception of God as mercy.

Much importance was also given to prayer in the belief of the founder of the Silsilah movement who professed how necessary it was to be fervent in one's faith to live the spirituality of dialogue.

The highlight of the experience for the two Salesians was the two weekends spent in Muslim families. "During these cultural immersions I was able to quickly feel at home with the families to which I was assigned, thanks to the Filipino characteristics we share: the smile, the hospitality, the respect. But what struck me was not so much the religious difference as the evident poverty. It was an excellent examination of conscience about my vow of poverty," continues Fr Maclasang.

"The Silsilah special program," adds the Salesian, "opened my eyes to the reality of the southern region of the Philippines. And besides having met and made friends with several good Muslims, I have also come to understand the challenges that the Filipino Catholics live daily in a Muslim environment, challenges not really so different from those of our Christian youth in Pakistan."

"May I hear the voice of the Lord clearly and continue to immerse myself in this reality of 'life in dialogue'," concludes the religious.