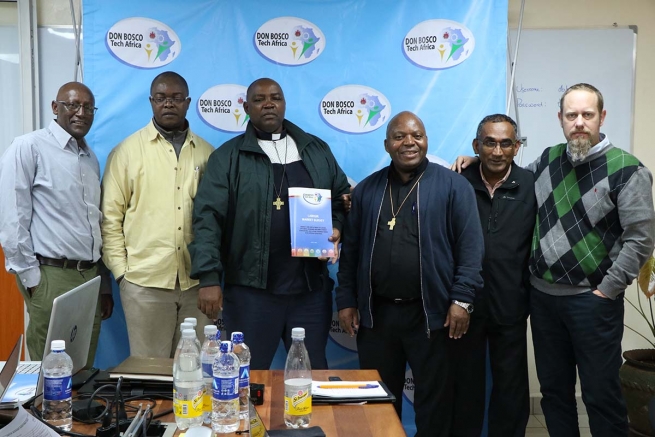 (ANS – Nairobi) – The Continental Report of the Labour Market Survey covering 25 sub-Saharan countries of Africa and Madagascar was officially launched yesterday, July 31st, at Don Bosco Tech Africa (DBTA) head office in Nairobi by Fr. Simon Asira, the DBTA board chairperson and the Provincial of AFE. The first copy was handed to Fr. Américo Chaquisse, Regional Superior of Africa and Madagascar. Present at the occasion was Fr. Alphose Owoudou, provincial of ATE, DBTA board members and the staff.

Father Asira appreciated the outcome and congratulated the DBTA team for conducting the survey which will not only enhance quality education in Don Bosco TVET centers in the Region but also promote dissemination of quality information to the public. Fr. Chaquisse said that DBTEC office is meant to facilitate the work of provincials of Africa and Madagascar to help them to understand the reality of Africa and this report will help them achieve this. “Our aim is quality, to prepare the young to be competitive, to be the best.” He congratulated DBTA for the good work done.

Fr. George TJ., the Executive Director of DBTA, stated that the Survey Report was a product of the concerted effort of the staff of DBTA, collaboration from the different SDB provinces and other stakeholders. He added that the report process started in early 2018 and underlined that in the main report there are 25 country reports that take into consideration the situation of every country.

He further stated that the document of the Market Survey will help Salesian TVET Institutions in the Africa-Madagascar Region to realign their training offer in accordance with the needs of the market for the benefit of the Youth entrusted to the Salesian Education in the Region.

With the report now accessible to the public, Fr. George TJ urged that Don Bosco Centres must take advantage of its findings and also share it with the relevant stakeholders in the TVET sector.

The survey was funded by the German Government through Don Bosco Mondo, Germany. The process was also supported by La Francophonie, Dakar. The main consultant was Maria Herazio and data analysis was done by Depa Consultancy.

Although the document is a copyright the information in the survey can be used for other research for the good of the young people. The document will also act as involvement in advocacy.