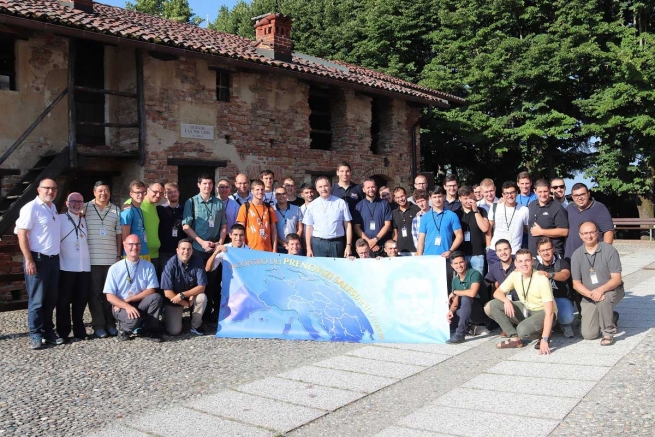 (ANS– Castelnuovo Don Bosco) A very special meeting took place last Sunday, August 4, at Colle Don Bosco, where Don Bosco grew and matured: the meeting between Fr Ángel Fernández Artime, who as Rector Major is called to lead the entire Salesian Congregation, and 36 young prenovices, who are still in a phase of attentive discernment of their own vocation; the meeting, as it was, of a father with many little children in their search.

The meeting with the Rector Major was actually only one stage for the priests, even if important, of a wider journey, fulfilled along 15 days of a journey on the Salesian Places. “The young people who have completed it are young people who in about a month will begin the journey of the novitiate within the four Salesian novitiates in the Old Continent,” Fr Fabiano Gheller, Delegate for Vocational Animation of the Piedmont and Aosta Valley Special District (ICP), said to ANS.

Accompanied by seven Salesians, namely directors and members of the Formation Department, the priests looked to Don Bosco and his sites to discover the fundamental steps of his vocational itinerary. Thus, in comparison with the life of the Saint of the Young and, in constant relationship with the Sacred Scriptures, they were accompanied towards understanding the fundamental passages of their own lives, to say yes to God in the Salesian style.

The days alternated moments of their journey and discussions in couples and in groups, together with profound explorations of Salesian spirituality.

“It is a beautiful experience of fraternal life, of sharing and identification with Don Bosco and with that model of life that we chose with God,” Walter testified, a prenovice of the Sicily Province.

“These are very particular days,” concludes the prenovice, “which permit us to rediscover the beauty of our call and which give us also a very peculiar breadth for those who want to be born to the Salesian life, because they make us know and appreciate the reality in which Don Bosco was born and where our Congregation was born.”