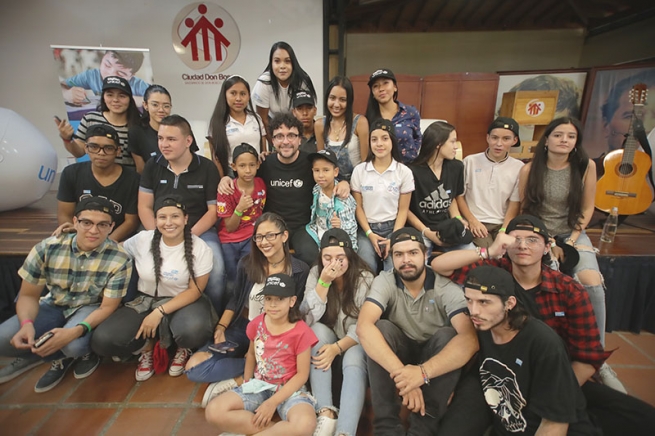 (ANS– Medellin) – Nearly 100 children, adolescents and young people, alongside animators and participants in the initiative “Our UNICEF”, promoted by the same international organization, participated in recent days in a meeting with Andrés Cepeda, UNICEF Goodwill Ambassador in Colombia. The musician and singer took up this role on 10 November 2017 and on the occasion said: “Music in this cause is a vehicle that can help us bring important messages and express what children want to tell people, that we absolutely have to listen to.”

The Colombian artist, born in Bogota on 7 July, 1973, is a singer and composer known for his love songs. On 18 July last, he went to the Salesian house of “Ciudad Don Bosco” to meet the youth animators who work there, the house's beneficiaries and the children of the district of Carpinelo, who are part of the Unicef program.

Immediately after meeting the Director, Fr Carlos Manuel Barrios, and several coordinators of the various programs – who invited him to learn about the mission of Don Bosco within the house – the singer went to the main auditorium, where he was welcomed by many guests.

William Barrios, National Head of the Salesian Programme “House of Specialized Protection” – which he too passed through in youth – then explained to all present that Andrés Cepeda’s visit had the objective of raising awareness on the processes carried out in collaboration with the “Our Unicef” program and to motivate regional leaders and assistants to work for positive leadership, children’s rights and peace.

The meeting consisted in the development of a series of workshops aimed at generating reflections on how the participation of young people can generate positive changes in society.

“I feel very happy to be with you all and to know ‘Ciudad Don Bosco’. We'll work very well together in this meeting,” said Andrés Cepeda.

Finally, the singer delighted the audience with two of his most famous hits: Día tras día and Déjame ir, recorded together with the band Morat.