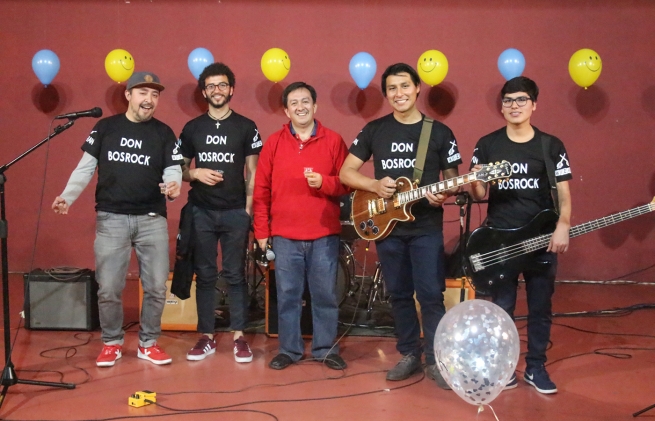 (ANS – Quito) – When Don Bosco thought of his educational proposal, he used different tools to generate empathy with young people, following the logic that it is “necessary to love what young people like, so that they love what the educator proposes.” One of these means was music, because it allowed children to occupy their leisure time, develop their skills and communicate a positive message to those who listened to them.

With these same premises, three young post-novices: Christian Chávez (Ecuador), Felipe Arango (Colombia) and Jesús Espino (Peru), and Salesian coadjutor Bro Jorge Moraga (Chile) decided to form an international band that they themselves describe as a musical experience with Don Bosco: DONBOSROCK. The genre they chose, as the name says, is rock, the thought being how close its rhythm is to young people.

On 27 July 2019, they presented their first album entitled: Por ustedes mi juventud, (For you my youth) composed of seven original tracks by Christian Chávez and four covers by other songwriters. The stage chosen was the auditorium of the Postnovitiate, where various groups of the Salesian Family, relatives, young people from the evening oratory of the La Tola house and lovers of good music gathered to hear them perform.

Fr Robert García, Director of the House of Formation, emphasized that for the Salesians it is important that the processes of evangelization do not proceed in a traditional way, but that means such as these be used, like music, to attract the attention of young people. “If there are trainees who possess and cultivate this talent, we must support them because they communicate a positive and Salesian message.”

One of the group's anecdotes concerns their name: in fact at the beginning they were called The Survivors, because they did not have enough musical instruments or amplification equipment for rehearsals; but this was not a lasting impediment and they began to compose with what little they had. They survived these challenges and the first song they composed, a ballad, was entitled Jesús.

Later they started to merge the musical rhythms and finally they opted for the rock genre. The singer, Christian, claims that music is for him part of his life and helps him feel fulfilled. He affirms that he would be different as a Salesian if he did not play the guitar as it was an instrument to know more children and convey to them the main message that Jesus is joy.

DONBOSROCK marks the end of a biennial formation process, but whose heritage aims to inspire more and more students and young people from different Salesian spheres to feel motivated to compose new Salesian music, from young people to other young people.