United States – Reflections by a Counselor in “Camp Savio” 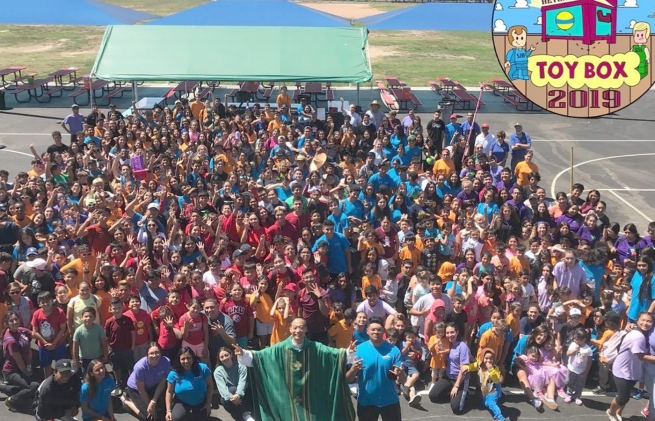 (ANS – Bellflower) – Every year, a camper will begin doing Camp Savio for the first time, and for many, it will be the first of many summers that they come to enjoy their summer. Campers spend many summers at Camp Savio because of all the great and fun experiences it provides for them, and because of the friendships they make here.

Seeing the fun games, activities, and field trips that the campers get to go on, and all the friends they make, many campers this year decided to have more of these for many summers to come.

Some of these campers enjoy camp so much that they even go on to become counselors, like the Boys grade counselor Albert Serrano. Albert has been going to Camp Savio as a camper since he was young and continued to go for many years, every summer. Albert said that his favorite part of going to Camp Savio was seeing his friends every day and being able to hang out with them all summer.

He did enjoy all the games and field trips that Camp Savio offered, but it was the fun he had with his friends that made him truly fall in love with Camp. Not only the fun he had but the fun that he saw his counselors having volunteered with the campers, which he said was his inspiration for continuing doing camp as a Counselor.

In a time where it is very easy for kids to spend their summers at home on their phones, playing video games, and watching YouTube videos, it is great to see that kids are excited to come to Camp Savio, and spend their days as campers with their friends.

The things I notice most at Camp Savio among the campers is the smiles on their faces when they are with their grades, laughing and hanging out with their friends. Overall, that is what keeps bringing kids back to Camp Savio, the friendships they form, because while the field trips are fantastically fun for kids, without their friends there, they would not be nearly as memorable. The bonds and friendships formed are what keep campers wanting to come back to Camp Savio and spend their summers there.

Serving together is a great way to form strong and fast friendships among the counselors and seeing the happiness in the kids’ face will be the reward for serving. Already, I have made new friends at Camp Savio that I would have not met otherwise. Our service to the kids will provide us an opportunity to form bonds and make memories that will last for years to come.

Through our service with the children, Camp Savio will provide an opportunity for many counselors to become more like the religious figures we look up to and believe in. St. John Bosco believed in helping young children, and to do so, formed the Oratory, a home, school, Church, and playground, and through Camp Savio, we will provide all of these to the children. Like St. John Bosco, we will bring out the excellence in each child, and through helping them, we will help ourselves.  Along with John Bosco, Jesus himself loved children and would spend time with them and bless them. He believed that they deserved kindness, and that because of their innocence, they would enter Heaven before all others.

When we treat children in the ways that Jesus and St. John Bosco did, giving them our time, love, and kindness, we are able to become more faithful and faith-filled.