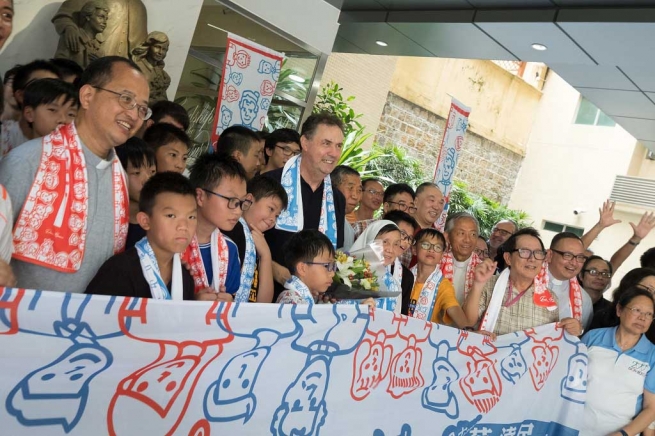 (ANS – Macau) – This moment has been long waited for. The Rector Major, Fr Ángel Fernandez Artime, accompanied by EAO Regional Councilor Fr Klement Vaclav and his secretary Fr Horacio López, arrived in Macau, where in 13 February 1906, Fr Versiglia and 5 other Salesian missionaries reached Chinese soil and began the first Salesian works in Far East Asia. In this week, the Rector Major is going to conduct his animation visit in the China Province which covers three main regions – Macau, Taiwan and Hong Kong.

The welcoming ceremony was held in Yuet Wah College on Sunday afternoon, where the 10th Successor of Don Bosco was greeted by some 100 youths, Salesians and Salesian family members. Colorful flags were put up. Everybody was carrying a towel which was specially designed for the Rector Major's visit. The hot weather did not deter the people to express their joy and excitement to meet Don Bosco's tenth Successor. Besides the Salesians and representatives from various groups of the Salesian Family, there were students from St. Luigi Versiglia School. They cheered and sang a Don Bosco hymn in Cantonese. Before entering the Salesian quarters, the Rector Major paid a short visit to Jesus in the Blessed Sacrament and offered a bouquet of flowers to Our Lady.

“I am happy to have come among you and meet each one of you. It has always been a precious and wonderful moment to meet personally the confreres. For this, it merits to travel million miles.”

The Rector Major shared the evening with the Salesians with simplicity and sincerity. In 5 years and 4 months as Rector Major, he has visited altogether 96 nations and 12,200 Salesian confreres.

In the heart to heart sharing, Fr Á.F. Artime encouraged the Salesians to have hope always because the Lord is showering His blessings to the congregation with new vocations. It is very much alive as it continues to take care of the poor young people. This makes it truly beautiful. At the same time, Fr Á.F. Artime invited the Salesians to give witness to their identity as Salesian consecrated person. This should be made more visible. To counteract the current of individualism, Salesians are called to grow in the aspect of fraternal communion.

The CIN Province is blessed with great and unique history, as the Rector Major puts it, and the Salesians at present and those to come in the future shall continue to write its history.

The presence of the Salesians of Don Bosco in China goes back to 1906 (Macau - Instituto Salesiano, Mother House) with the development in Hong Kong (1927) and Taiwan (1963). At present there are 13 canonical communities and 115 confreres. The majority of the Salesian settings are schools, some parishes, social work, youth center-oratory and a vibrant Salesian Youth Movement around the numerous schools. Father Ángel is also meeting a very dynamic and united Salesian Family with large numbers of Don Bosco Past Pupils, Salesian Cooperators, FMA and SAL sisters and VDB.

Photos of the Visit are available at ANSFlickr