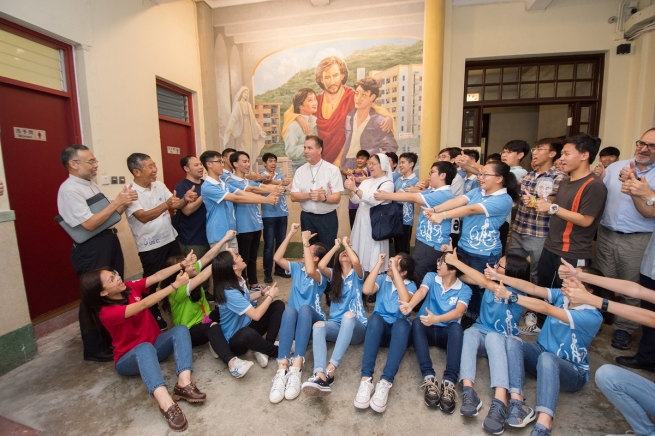 As soon as he arrived, the Rector Major immediately went to the Salesian Missionary House of "Shau Kei Wan", where he was welcomed by a large group of young people, by members of the Salesian Family and by some older confreres. The Successor of Don Bosco was received with great enthusiasm and greeted with flags, banners, dances, photos, handshakes and hugs.

Once again, addressing young people, Fr Artime urged them to keep their joy and happiness alive. He then reminded them of the meeting scheduled for the following day at the Tang King Po school in Kowloon. Here, the Rector Major shall spend his time among the young in dialogue and to answer their questions.

He then met the Provincial Council for an open-hearted dialogue that lasted two hours and which was also attended by the Economer General, Br Jean Paul Muller.
It was on this occasion that Fr Artime wanted to thank Mary, on the day when the Feast of the Assumption was celebrated, for the many graces granted, for her guidance and for her constant protection.

At the end of the meeting, the Rector Major stayed for dinner with the Council, continuing the fraternal conversation at the table.

Photos of the Visit are available on ANS Flickr page.