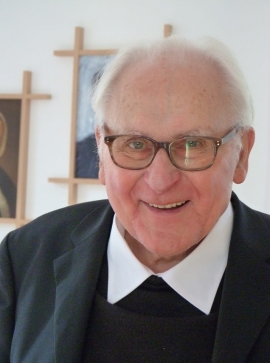 (ANS - Cologne) - The Salesian Mission Office in Bonn has announced the death of Father Oerder on the anniversary of Don Bosco'sbirth this past August 16. Fr Karl Oerder, a Salesian priest, was Head of that same Office for 25 years, as well as parish priest of the Salesian parish of St Winfried, also in Bonn, as well as being co-founder and member of the directive council of "Don Bosco Mondo".

Johannes Karl Maria Oerder, his full name, was born on 31 October 1928 in Scheurenhof, near Cologne. In 1952 he began his novitiate at Ensdorf. Having made his perpetual profession in 1956, he was ordained a priest at Benediktbeuern on 29 June 1961.

In his long Salesian life he was Provincial Delegate for Vocation Ministry, Provincial Vicar (1968-1970), and then Superior (1970-1978) of the North German Province. After his mandate as Provincial - in a period characterized by enormous social and religious upheavals and important innovations in the life of the Province - Fr Egidio Viganò, VII Successor of Don Bosco, entrusted him with the leadership of the Salesian Mission Office in Bonn; in the same period he was appointed pastor of the Salesian parish of St. Winfried.

In the following 25 years, until 2003, the Don Bosco Campus in Bonn was Fr Oerder's place of residence: the place where he gathered so many people around him; where he always made new contacts in different environments to support the Salesian mission; where he inspired so many young people with selfless service; where he formed committed lay people; where he returned after traveling around the world to coordinate projects and inform the growing number of friends and supporters.

He also made of the small parish of St Winfried an important political and ecclesiastical meeting place and closely linked the parish and its activity to that of the Mission Office.

To support the worldwide action of the Salesians, especially in the field of education and formation, he founded the association "Jugend Dritte Welt" - today "Don Bosco Mondo" - together with several volunteers.

"He created and built great things, leaving profound and lasting traces on many people and in many places. Those who met him could perceive that he was acting moved by a deep faith and true charity. He saw his mission in the fact that, following the example of Don Bosco, poor and needy children and young people could indeed experience the love of God, through our actions," said the current Head of the Office, Fr Josef Grünner.