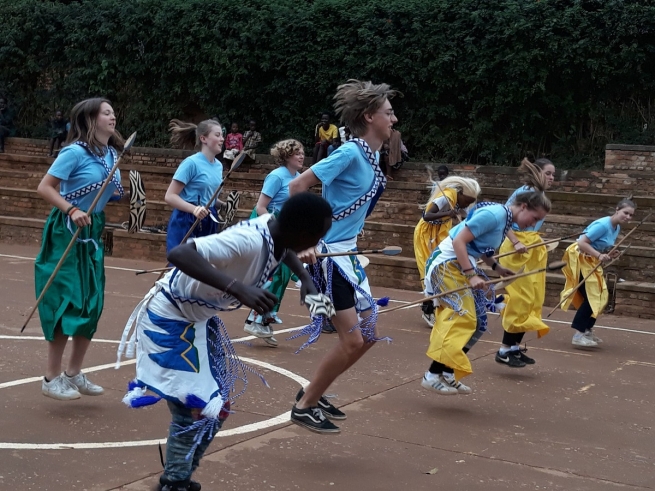 (ANS - Kigali) - In recent days, ten students accompanied by four young and enthusiastic teachers from the Don Bosco College of Zwijnaarde, Belgium, spent ten unforgettable days at Don Bosco Muhazi, in Rwanda, where they had time to interact with the local community and to discover the surrounding natural environment.

The students also met Mrs Colette Schaumont, coordinator of the Planning and Development Office of the Salesians of the Africa Great Lakes Province. They took part in a wide variety of activities, including an intensive introduction to Computer Science and English.

They also had fun, on foot or by boat, in discovering the natural beauty of the area and playing sports; later the students took part in the Oratory's activities, including dance and percussions.

The young people of the Don Bosco College Zwijnaarde also celebrated the "Feest van de Vlaamse Gemeenschap", the Flemish Community Festival, an important historical date for the Belgian population. On this day, the young explored the Gikomero market and its surroundings and spent moments of conviviality and sharing at a local restaurant.

On the day of their departure, the children were greeted with a party in full Salesian style. The farewell evening was enriched with songs, poems and dance. The young people of Rwanda in fact presented several traditional dances; they also offered flute performances and recited a poem entitled "Drums for peace."

Finally, all together, they took part in typical Rwanda games and were able to taste the characteristic foods of the area, prepared by the Culinary Arts students.

In memory of this stay, agasekas filled with local tea were donated. The agaseke are small baskets that in ancient times were used for weddings and symbolize peace and love.

They were, thus, ten intense days, that are sure to be unforgettable.