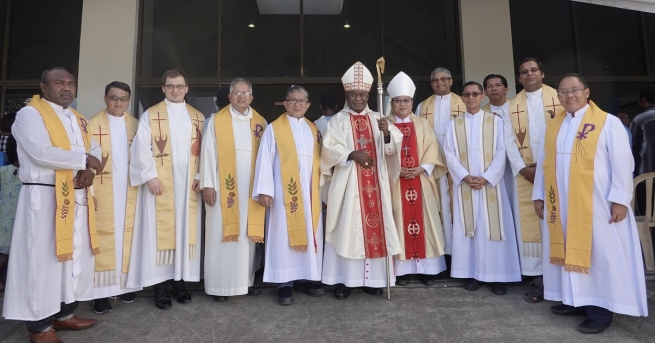 (ANS - Port Moresby) - The Parish of Mary Help of Christians in the district of Sabama, Port Moresby, celebrated the important milestone of its "Silver Jubilee", its 25th anniversary. The celebrations were held last August 18 at the Don Bosco church in Gabutu and had the following theme: "to grow, to serve and to renew".

Cardinal John Ribat, Archbishop of Port Moresby, was the main celebrant of the Eucharistic celebration of thanksgiving; with him were: Mgr. Pedro Baquero, Salesian, Bishop of Kerema, Fr Alfred Maravilla, Superior of the Vice-Province “Papua New Guinea-Solomon Islands”, Fr Ivo Coelho, General Councilor for Formation, Fr Jacek Pinocy, Secretary of the Apostolic Nuncio of Papua New Guinea and the Solomon Islands, and seven other priests.

The Eucharistic celebration, which saw the participation of thousands of people, was also enriched by the cultural dances of the different communities. The youth of Sabama and other members of the parish led the liturgy and the choir.

In his homily, Cardinal Ribat highlighted the virtues of Our Blessed Mother and invited everyone to take her as an example and imitate her. He then prayed that she bless all the parishioners and for the parishioners themselves to always be a beacon of light for the inhabitants of the districts. He then prayed that the community be always free from any vices and weaknesses.

It was then time for the party celebrations. Various groups involved the Salesians with the "bilas", decorations typical of Papua New Guinea which consist mainly of body paints, feathers, shells and accessories made from natural materials found in forests and swamps. It was a unique moment, in which the different groups wanted to show gratitude to the Salesians for their continuous efforts to integrate with the life and culture of the local population.

In his speech, Fr Angel Sanchez, pastor ad interim, spoke about the current situation and the history of the parish over the past 25 years. He thanked the former parish priests, those present and all those responsible for the celebration. For their part, all the parishioners affirmed their willingness to always respond to God's call to grow, serve and be renewed in their faith.