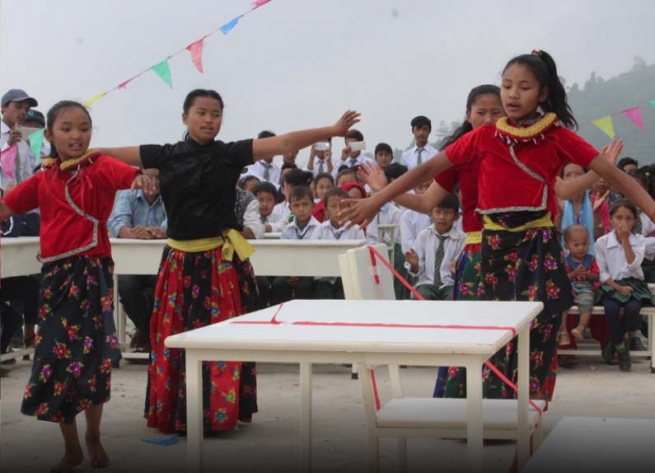 (ANS - Sankhu) - Children and young people from Sankhu, district of Lalitpur, will be able to return to classrooms at the beginning of the new school year. The Shree Saraswoti center has not only been rebuilt, but has also been equipped with everything necessary and sanitary fixtures and all necessary toiletries have also been installed, so that boys and girls can properly take care of hygiene. Furthermore, the school will also have a kindergarten, so that even the smallest children of Sankhu can access quality education.

The school was inaugurated in recent weeks during a ceremony that brought together over 200 people, including teachers, students and their families. Among those present were also the head of the village development committee, Dhurva Ghimire, and the head of the Salesians in Nepal, Fr Augusty Pulickal.

Salesian missionaries are still working to rebuild the country after the terrible earthquakes that hit Nepal in April 2015, causing the devastation of Kathmandu and the surrounding areas and the death of around 8,000 people. The reconstruction of schools in rural areas and the provision of suitable equipment - including sanitation - are part of the Salesian objectives in the country, not to mention the more than 1,600 children and young people who are already being educated in the five Salesian schools in Nepal.

Thanks to the Salesians, 10 rural schools have already been rebuilt and equipped. But the development program of Don Bosco's Spiritual Sons is broader and also includes teacher training.

"Salesian institutions are welcome centers where everyone feels at home and the educational programs and diplomas released help many young Nepalese to build their future," a teacher explains.

Salesian missionaries have been working in Nepal for more than 25 years, taking care of the most vulnerable children and young people. The construction of schools that can withstand earthquakes and access to education for the youngest and most vulnerable children is the daily commitment of the Salesians in Nepal so that the children and young people of Nepal have the necessary tools to change their lives and become agents of development in their country.