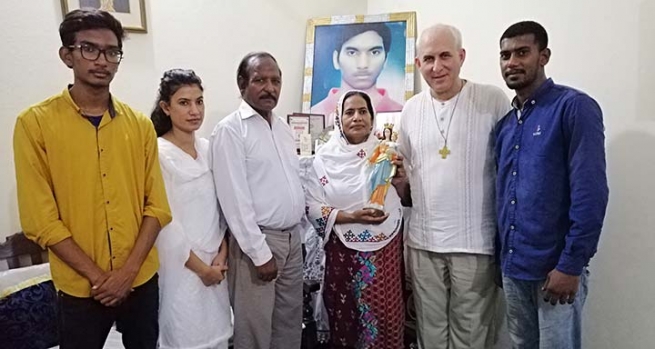 (ANS - Lahore) - As part of his Visit to the two Salesian houses in Pakistan, namely in Quetta and Lahore, the General Councilor for the Missions, Fr Guillermo Basañes, paid special attention to the family of Akash Bashir, a Salesian Past Pupil who died to prevent an attack on the church of St John Bosco in Youhannabad.

Fr Basañes wanted to personally meet the family of the young Akash, a Salesian Past Pupil who, just twenty years old, gave his life on March 15, 2015, while serving as a security guard in the church of St John Bosco.

That day, in fact, he prevented a man who carried explosives from immolating himself within the parish, where hundreds of people were celebrating Palm Sunday Mass. To avoid the explosion, Akash bravely embraced the terrorist and died saving the lives of all those who were praying inside the church.

Fr Basañes then dedicated his last afternoon in Lahore to meeting with the young man's family, to whom he delivered a small statue of Mary Help of Christians. It was the Rector Major, Fr Ángel Fernández Artime, who wished to send the statue from Turin, as a sign of respect and appreciation for the life and martyrdom of Akash.

The family members accepted the blessings of the Rector Major and the gift with great joy and gratitude.

The General Councilor for the Missions also had the opportunity to visit the church of St John and observed the exact place where the martyrdom of the young Past Pupil took place. He also visited the monument dedicated to his martyrdom and finally prayed at his tomb.

The Salesians of Pakistan, united with Fr Ángel Fernández Artime, continue to give thanks for the life of Akash Bashir, as he is a symbol not only for the Past Pupils, but for all the young religious who live in Islamic countries. His heroism and martyrdom are a pride for the Salesian Congregation and for the whole Pakistani Christian community.

In fact, already in January 2017, Fr Francis Gulzar, pastor of the Church of St. John and Vicar General of the Archdiocese of Lahore, sent a letter to the Archbishop of Lahore, Msgr. Sebastian Francis Shaw, "to formally request to start the official procedure to declare Akash Bashir Martyr, to honor his sacrifice for his community in the parish of Yauhanabad."