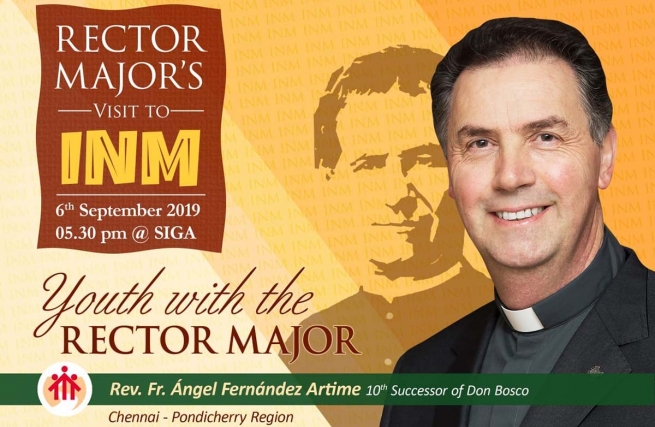 (ANS - Rome) - Fr Ángel Fernández Artime, Rector Major of the Salesians, is once again about to leave. This time he will not  adding a new name to the very long list of countries he has visited as Rector Major, because he will return to India where he has already been several times since the beginning of his mandate - the last one last spring. This time, however, there will be different Salesian realities that he will animate: those of the Provinces of Chennai (INM) and Dimapur (IND).

Accompanied by his Secretary, Fr Horacio López, Fr Á.F. Artime will land at Chennai airport on Friday, September 6th. Upon reaching the Provincial House, he will preside over the Eucharist and gather with the Provincial and his Council.

On the morning of the following day he will visit the missionary aspirantate of Perambur, the General House of the Sisters of Mary Auxiliatrix (SMA), 27th group of the Salesian Family, and the Theologate of Kavarapettai. In the afternoon, at the Provincial House of the Daughters of Mary Help of Christians (FMA), he will encourage the Salesian Family in Chennai and the Puducherry area.

On Sunday 8 September, the Rector Major will first be in Vellore - about 140 km west of Chennai - where he will preside over the Eucharist for the Salesian Family in the area; and then to Tirupattur - 90 km further south-west - where he will meet aspirants, prenovices and novices of the formation house. The long day will end with a lively youth party.

On Monday 9, at Tiripattur, the X Successor of Don Bosco will meet with his confreres from the regions of Vellore and Tirupattur, before returning to Chennai to depart again, this time for Dimapur.