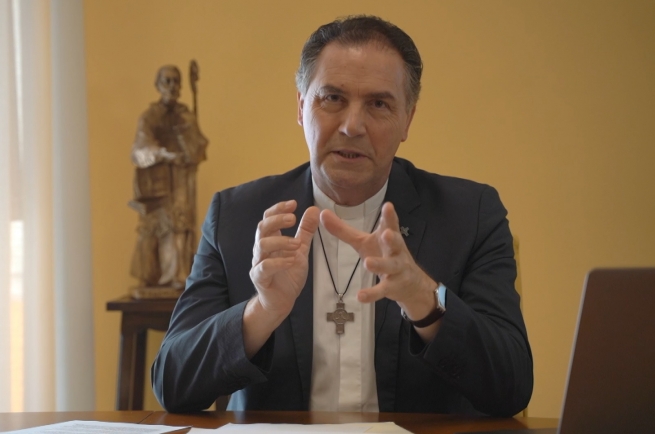 (ANS - Rome) - For the last video of the "Dear Confreres" column of this six-year term, available online today, the Rector Major, Fr Ángel Fernández Artime, starts again from young people and from the cry that has come from all the Salesian Circumscriptions through the Provincial Chapters' reports: young people need Salesians, educators and witnesses. But they must be educated to know how to face the challenges of the present time.

The Rector Major speaks from the Hall of the General Council at the end of the summer plenary session, and with his gaze already projected to the next important appointment that awaits the Congregation: the 28th General Chapter (GC28).

"There is a constant element that fascinates me: it is listening to what our young people tell us. They simply tell us: dear Salesian confreres, we need you, your presence next to us!," says the Rector Major.

The boys and girls do not ask for the presence of "administrators or managers", but Sons of Don Bosco who are like their founder, who know how to be carers in life to young people: "What else is still needed, after an appeal made with this intensity to indicate to us the way for this twenty-first century?" asks the Rector Major.

Subsequently, the Successor of Don Bosco also touches on a second theme, the motivations that led him to choose the motto for the Rector Major's Strenna for 2020: "Thy will be done on earth as it is in heaven" (Mt 6, 10). "GOOD CHRISTIANS AND UPRIGHT CITIZENS". A formula, notes Fr Á.F. Artime, which contains the "politics of Our Father."

They are two inseparable elements: "We were born to be educators to the faith of the young, to accompany them to the encounter of Jesus." But, adds the Rector Major, Salesian education cannot be disengaged or unlinked from the social and global context: "We cannot educate our young people to sit back, shut inside their homes, without bothering anyone ... No! We must prepare them for life ... To serve others, to commit themselves for others, not to be indifferent to the great global challenges of today, to be sensitive to the defense of Human Rights, especially of minors, and also to be open to a possible commitment in the world of politics, according to their sensitivity and their faith."

The "Dear Confreres" video is already available in 25 languages ​​on the ANSChannel YouTube channel. Here the playlist with subtitled videos in different languages ​​- a playlist that will be enriched gradually in the coming days.