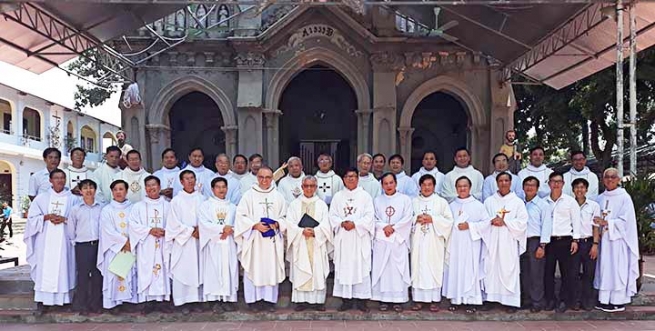 (ANS – Hanoi) – The second Delegation of VIE province (Mongolia Delegation was established in 2009) was inaugurated on 7 September 2019, during the 10:30 a.m. Eucharist in the Parish Church of St. Peter in Van Phuc (Hanoi) celebrated by Fr. Joseph Nguyen Van Quang (Provincial of Vietnam - Mongolia) and concelebrated by 40 Salesian Priests and attended by a small group of Salesian Family members (Salesian Brothers, FMA sisters, Salesian Cooperators and two VDB). Fr. Thomas Aquinas Tran Quoc Tuan, parish priest of Van Phuc, was introduced to his 3 year term of office. Also the complete Provincial council was present at this occasion.

Before the Mass, representatives from all 10 Salesian presences in the northern part of Vietnam gathered for a short meeting, to understand the Delegation Statutes approved by the Rector Major in July 2019 with a clear wish for effective animation and to establish firm roots for Salesian animation. The current confreres raised many questions about “What is the Delegation? What is exactly the role of the Delegate? How to establish new Salesian works when we are based mainly in diocesan parishes with a short term agreement?” All questions were briefly commented on by the EAO Regional Councillor, through translation by the first Secretary of the Delegation, Fr. JB Tran Van Hao.

In the short address after the Gospel the EAO Regional Councillor expressed his gratitude to everyone who has contributed to the birth of the Delegation, especially to the Salesian confreres, the lay mission partners and benefactors over the past 25 years. Although there are many challenges on the way, the words of faith shared by St John Paul II “Don't Be Afraid” (inscription on the Salesian community house in Van Phuc) expressed his second point. In his third point Fr. Klememnt expressed the need for an ongoing search for a common vision in the fast-changing situation of the youth and the society.

At the conclusion of the Eucharist, the newly installed Delegate Superior, Fr. Thomas Aquinas, shared his vision for next 6 years: in order to lay solid foundations for the future Vice-province, he invited everyone to focus on community building, formation of the Salesian Family (esp. Salesian Cooperators, Alumni and ADMA) and work with their whole heart for the total development of the youth in this specific culture of the North.

The new Delegate also highlighted the specific need to work for vocations, through the committed witness of religious life and invited all confreres to build a stronger sense of belonging to each local community, to the Delegation and to the whole Vietnam-Mongolia province.

Among the current Salesian confreres (44, with no less than 11 Salesian Brothers) only very few were born in the North, thus finding themselves in a true missionary environment, needing to learn the local traditions, customs and also some ethnic dialects of minority groups. The 10 Salesian communities spread from Ky Anh (Ha Thinh, most southern presence) until Lao Cai (most northern presence) are mostly parish settings trying to develop some response to the needs of the young people in this large part of the country.