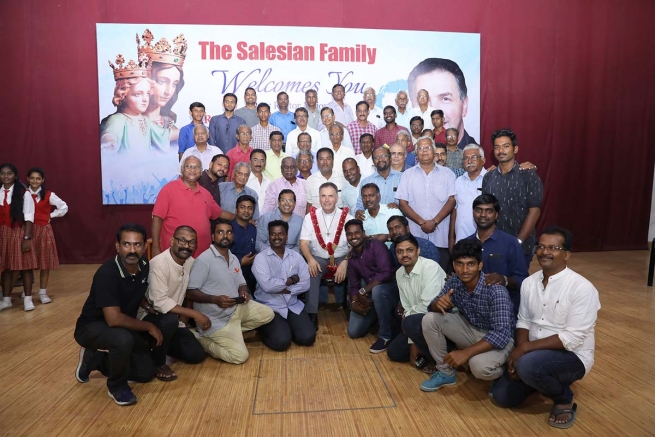 (ANS - Chennai) - It was the young people, those in formation, as well as those attending Salesian circles, who filled the last days of the Rector Major's Animation Visit to the India-Chennai Province (INM). As a new Don Bosco, Fr Ángel Fernández Artime encouraged them to listen to God's voice in their lives.

Faced with the "best Salesian youth" of the Province - 28 aspirants, 25 pre-novices and 21 novices - gathered at the aspirantate of Tirupattur, the Rector Major said that God loves the young very much but only calls some to live the specific vocation of the consecrated. In the formative journey, he emphasized, sincerity is needed: "Those in formation should not be afraid to express themselves clearly with the Superior, who will guide him with goodness. Otherwise, in the long run, it becomes impossible to be happy."

Once again he underscored that the Salesians are born to serve poor young people, and this service is only possible if one remains rooted in God: "As the trees go deeper and deeper over the years, the Salesian must grow even more deep in his experience of God, to escape the drought that comes from temptations," he said.

After stressing the importance of obedience, the Successor of Don Bosco concluded by renewing the call for missionary generosity. Today, Salesian India is growing at a high rate, but all this would not have been possible without the sacrifices of the first European missionaries: "It is our duty to return a hundred times what we have received so generously in the past!"

After this session so full of content, the Rector Major was able to relax with the contagious enthusiasm of the young who animated a huge youth party at the "Sacred Heart" institute of Tirupattur.

Finally, on the morning of Monday 9, the Rector Major greeted the students of the "Sacred Heart" institute, inaugurated the covered stadium and planted a small tree on the institute's campus.

During the night, he then reached Dimapur by plane, where today a new Animation Visit begins.