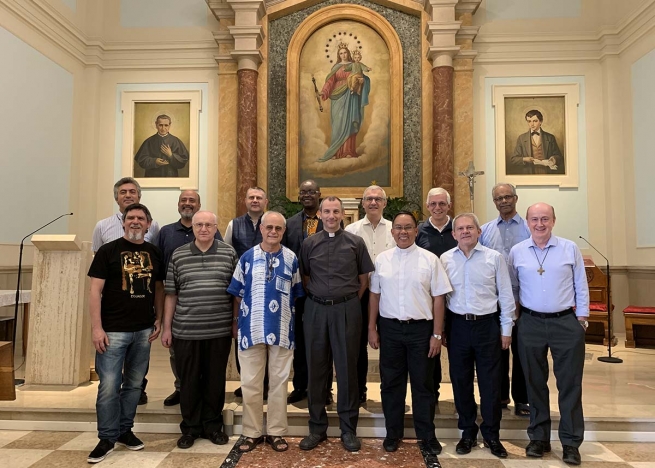 (ANS - Rome) - A little less than a year ago - last October 3rd - the Rector Major, Fr Ángel Fernández Artime, appointed the members of the Precapitular Commission on the theme of the 28th General Chapter (GC28). A little over 150 days from the GC28's beginning, and after individually preparing themselves with great care in the preceding weeks, on Monday 9 September the members of the Commission met in Rome for a two-week gathering that will lead them to elaborate the 'work tool' of the GC28.

"The task of this pre-capitular Commission," explained the Regulator of the GC28, Fr Stefano Vanoli, "is to study all the Provincial Chapters and personal contributions on the theme Which Salesians for today's young people, and also to take the contents of the Rector Major's letter for the GC28 call, in order to prepare a synthesis," a synthesis to serve as a guideline for the work of the Chapter.

Until Friday, September 20, when the meeting ends, the members of the Commission appointed by the Rector Major – accompanied by the Regulator – are engaged in the study of three themes:

The Commission is divided into three working groups, on a linguistic basis. Of import, the effort the Commission members are called to make: each member of the Group must study about 10 Provincial Chapters and make a personal synthesis. Subsequently, each group will obtain, starting from the personal evaluations, a single summary, which it will present to the entire Commission.

In the study of each of the three thematic groups or nuclei, each work group will use the same tripartite scheme of the methodology proposed to the Provincial Chapters:

Listening – the phase in which we ask to recognize the situation, the promising and risky expressions regarding the priorities of the mission, the needs of formation, the involvement of the laity.

Interpretation - the time to read the situation, starting from what was recognized and acknowledged in the first phase and having as keys the Gospel, the life of the Church, the Constitutions, the signs of the times.

Choices - the time to find what makes the Congregation advance towards new ways of living the youth mission, to fulfill the profile of the Salesian, to involve the laity. To be very practical, this third point provides in detail: highlight one or two choices for each nuclei; indicate precise tasks and commitments; and to indicate the conditions for making the profile of the Salesian for today's young people better emerge.