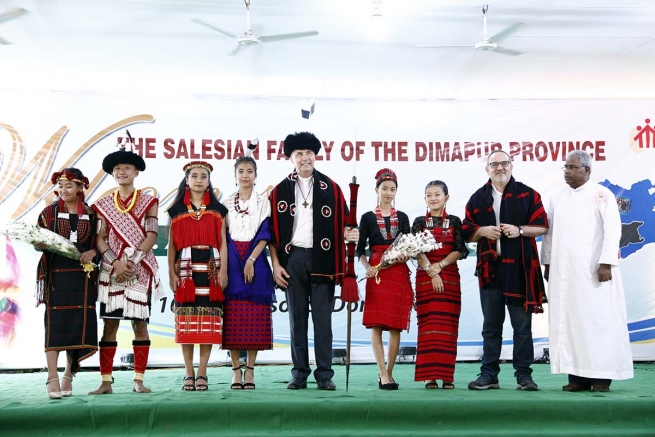 On the afternoon of 10 September, he was warmly welcomed by Fr Jose Kuruvachira, provincial of Dimapur Province, by Salesians and other members of the Salesian Family at Dimapur Airport. The youthful music bands from Don Bosco School, Palin (Arunachal Pradesh), and Don Bosco School, Dimapur, as well as the ‘Naga warriors’ and traditional dancers added colour to the reception accorded to the Rector Major, his secretary Fr Horacio López SDB, and Fr Maria Arokiam Kanaga SDB, Regional Councilor for South Asia. The accompanying parade provided by 20 bikers of the Nagaland Motor Cycle Club from Dimapur airport to the Provincial House Dimapur was spectacular. Another reception was organized for the Rector Major in the Provincial House.

At 6:30 pm, around 350 Don Bosco alumni from the aforementioned states gave a rousing reception to the Rector Major. In his message, Fr Ángel, 10th successor of St. John Bosco, said he was greatly impressed to meet such vibrant units of the Don Bosco alumni in this part of the globe. He told them not to remain just cherishing the happy memories of being Don Bosco past pupils but to actively live the values they have imbibed from their ‘alma maters’.

In his five years since 2014 as Rector Major, Father Ángel has visited most of the 134 countries where the Salesians work and has met around 12,000 out of the +14,000  Salesians. In today’s message he appreciated the great work done by the Salesians, the members of the Salesian Family and the teachers, especially in the field of education in this region. He gratefully acknowledged the presence of the four Bishops who had come to express their solidarity with the Salesians and their Rector Major. To the youth of this colourful region, he said that every Salesian is born precisely for their welfare. He enthralled the audience as he played guitar and sang three Spanish melodies accompanied by his secretary Fr López SDB.

Speaking earlier, the Dimapur District Commissioner exhorted the youth to gratefully accept the guidance offered by the Salesians and the teachers and not to be misled by social media.

Bishop James Thoppil gratefully acknowledged the services of the Salesians and the Salesian Family, especially in the Diocese of Kohima. He appreciated the encouraging visit of the Rector Major.

Shri Francis Ngajokpa, former Minister, Govt. of Manipur, exhorted all to appreciate the great service the Salesians render at the cost of great sacrifices. He highlighted the importance of honesty and forgiveness as taught by the Salesian system of education.