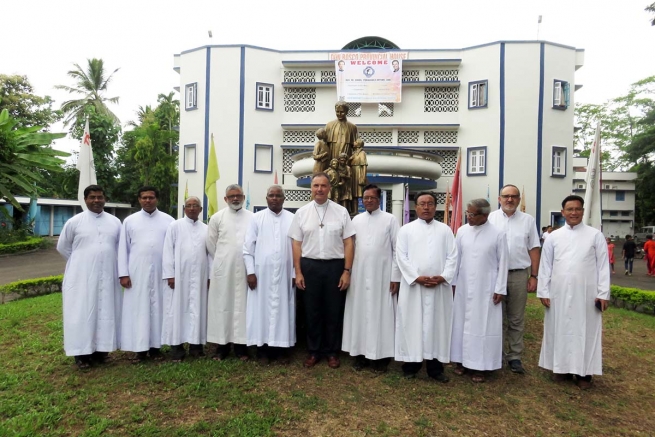 (ANS - Dimapur) – The Animation Visit of the Rector Major, Fr Ángel Fernández Artime, to the India-Dimapur Province comes to an end, as it had begun: amidst the joy and warmth of the young people and of the Salesian Family cheering for the presence of today's Don Bosco among them.

In the afternoon, after the festive lunch with the lay collaborators in the community of the Provincial House, the Successor of Don Bosco reached the “St. Mary” House of the Missionary Sisters of Mary Help of Christians (MSMHC), the 12th group of the Salesian Family. During the cordial meeting, the Rector Major was congratulated by the institute's musical band, by the girls who attend, and by the sisters themselves; and he returned the affection he had received with words of encouragement to all and even playing several Spanish songs.

Later, he visited a Salesian Non-Formal Vocational Training Center, also located in Dimapur. He met the Center's Director, Fr Devasia Rajeesh, and other confreres in the community, from whom he received a detailed account of the apostolate carried out for disadvantaged young people: courses in carpentry, welding, motor mechanics, animal husbandry, driving, organic farming and fishing. Satisfied in seeing the wide range of services being offered, the Rector Major praised their efforts and commitment and urged them to continue in this properly Salesian service.

On the last day spent at Dimapur, Saturday 14 September, Fr Artime celebrated the Eucharist with the community of the Provincial House and then, escorted by the Provincial and a good part of his Council, he reached the airport from which he left for Calcutta, a a stopover, for his definitive return to the Salesian Central Office.