Ecuador – "What does it mean to do pastoral work in the university world today?": Pastoral Care of IUS 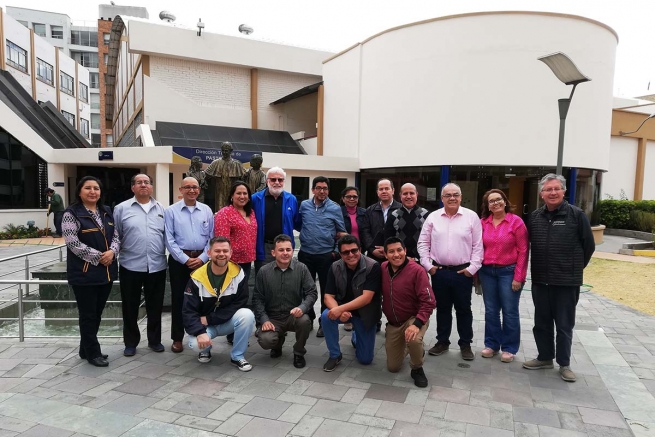 (ANS - Quito) - On the "El Girón" campus of the Salesian Polytechnic University, Quito campus, the heads of Pastoral Care of the Salesian Higher Education Institutions (IUS) of America gathered from 12 to 14 September to reflect on the theme: “What does it mean to do pastoral work in the university world today?” To this end, during the meeting's three days contents, methodologies and formative strategies for the formation of pastoral animators were discussed and shared.

It has been written that the purpose of every Salesian Youth Ministry activity offered to any young person aims at the “construction of character which has Christ as its fundamental reference; a reference that, by becoming explicit and progressively internalized, helps him or her to see history like Him, to judge life like Him, to choose and to love like Him, to hope as He teaches, to live in Him communion with the Father and the Holy Spirit.” It is in this perspective that pastoral work presents itself in a University with a Salesian identity.

Reflection on university pastoral work is a point in the common program of the IUS at a global level and this type of meeting allows members and participants to exchange ideas and make proposals to face the challenges that arise in this field on every continent. The meeting was attended by Mario Olmos, SDB, animation team member of IUS America, Antonio Wardison, responsible for the field of pastoral care of IUS America, and 15 delegates from various countries.

Fr Marcelo Farfán, IUS Coordinator General, said that the Salesians are making the vision of the Church their own: “University in the Pastoral and not universities that do only pastoral; this means that it is essential to overcome the idea that pastoral care is only a department, to embrace, on the contrary, the idea that it refers to an entire university project, where aspects such as strategic plans, teacher formation plans intervene ...”.

“The pastoral discourse is perhaps the most important in the Catholic and Salesian university world because it touches on the identity and mission of the institution. It is regrettable that we continue to think that these two aspects are not connected, when actually pastoral care and the university world are one reality,” added Father Farfán.