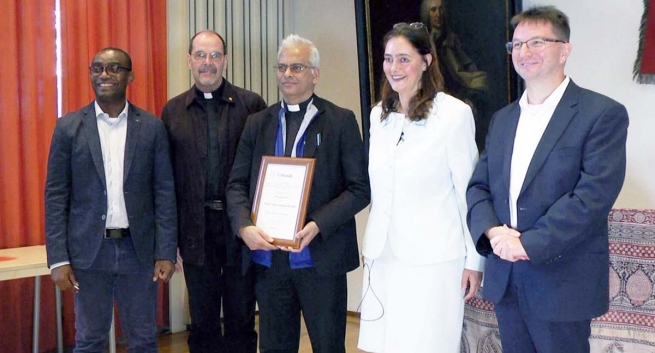 (ANS - Frankfurt) - Fr Tom Uzhunnalil, the Salesian Indian missionary kidnapped in Yemen in March 2016 by a militia commando and released after 18 months, received the "Stephanus Foundation" award for Christians persecuted across the globe. The award was granted on Sunday, 15 September, at the headquarters of the foundation in Frankfurt.

Despite what he has experienced, in his public meetings he always tries to instill calm and serenity and always proposes the theme of dialogue and encounter. He testifies to the value of "prayer" in the difficulties and "the importance of fighting alongside the persecuted," the organizers explained.

The "Stephanus Foundation" for persecuted Christians is named after the deacon of the early Christian church, the first martyr to be stoned for his faith in Jesus Christ. According to the statute, the association helps persecuted Christians in need by providing subsistence compensation or covering legal fees, as well as reporting cases of violation of religious freedom.

In the context of the award ceremony, just over two years after his release, the 61-year-old Salesian again spoke of the experience of his missionary service in Yemen - a mission that was founded by his uncle, Fr Mathew Uzhunnalil - and then he retraced what he had experienced in the hands of the kidnappers.

Still very much alive the Christian community's memory of the attack on the home for the elderly of the Missionary Sisters of Charity in Aden - the Sisters of Mother Teresa - of March 4, 2016, in which four religious and another 12 people, including guests and service staff, were killed. It was on that occasion that Fr Tom was kidnapped and, after months of captivity, finally released on 12 September 2017.

Among those who have received the award in recent years, there are some leading personalities of the ecclesial world: card. Louis Raphael Sako, Patriarch of Babylon of the Chaldeans (Iraq); Cardinal Joseph Zen, bishop emeritus of Hong Kong, also a Salesian; and Fr Samir Khalil Samir, an Egyptian Jesuit and a great expert on Islam and the Arab world.