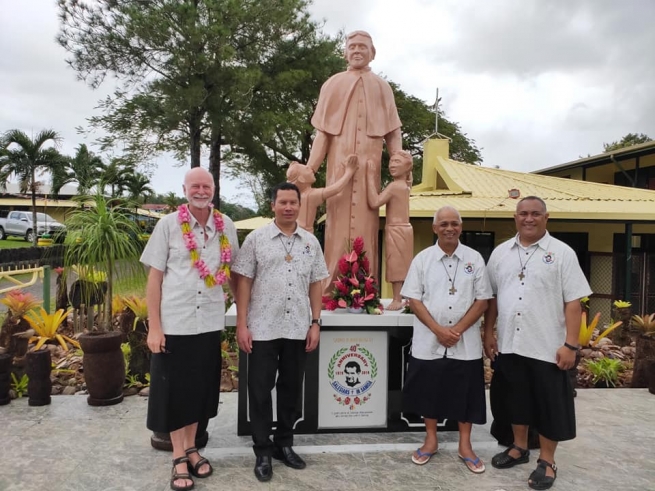 (ANS - Alafua) - Archbishop Alapati Lui Mata’eliga of Apia celebrated the Eucharist last Saturday 31 August at the Parish of St John Bosco in Sinamoga on the occasion of the 40th anniversary of the Salesian presence in Samoa. The Eucharist was concelebrated by the Superior of the Australia-Pacific Province, Fr William Matthews, the Provincial Economer, Fr Peter Carroll, the Provincial Delegate of the Pacific, Fr Vito Pau Petelo, many diocesan priests and a good number of Salesians, including Fr James Adayadiel and Fr Sebastian Chacko who first arrived in this Pacific paradise 40 years ago.

A large number of young people from Salesian schools and parishes also participated in the Eucharist, joyfully joining the celebrations for this important anniversary.

During his homily, Archbishop Alapati Lui Mata'eliga encouraged the adults and parents of Samoa to love and educate their children and young people, inviting them to always treat children as their peers.

At the end of the Eucharist, Fr Will Matthews, together with Sr. Edna Mary MacDonald, FMA Provincial, inaugurated and blessed a new statue of St. John Bosco, kept near the community chapel, precisely at the entrance of the Don Bosco Technical Institute of Alafua.

The celebration ended with a "fiafia", a traditional festival, which took place at the Don Bosco Technical Institute in Alafua and which was enriched with traditional songs, food, shows and dances.

Currently in Alafua, the Salesians take care of the Prenovitiate, a center for vocational and professional orientation, the oratory and a parish. The Salesian school of Alafua has 22 educators, two staff members, five Salesians and 198 students - of which 47 are freshmen - with an increase in enrollments compared to the previous year of 74%.

In all Samoa, in total, there are ten professed.