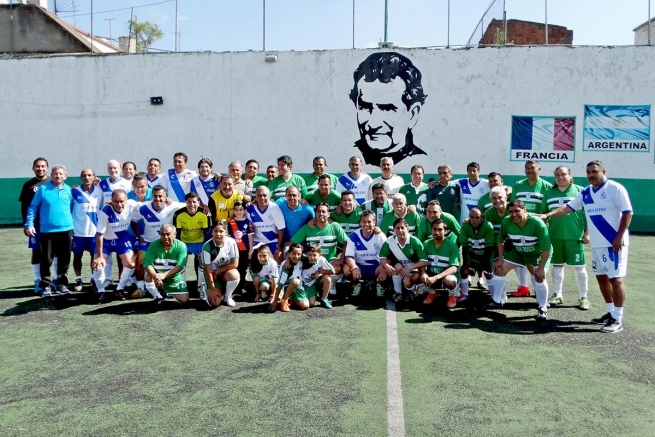 (ANS - Puebla de los Ángeles) - The city of Puebla de los Ángeles dressed up for the festivities of this past September 8th. In fact, a truly memorable event took place at the Don Bosco Oratory: Salesian brother José Víctor López and the Oratorian community, composed of catechists, young animators, Oratorians, coaches and leaders, welcomed the "Legends of Puebla" team, formed largely by the winning formation of the Mexican soccer championship 1989-1990.

Also attending, alongside the team of the "Campeonísimos", the champions, was Jacobo Ordaz Moreno, President of the Municipal Council of Puebla, who made it possible for this event to be staged.

The match itself was much fought, but the scoreboard favored the team of the "Legends of Puebla" from the beginning, the team appearing to be completely unaffected by the years.

The most important thing about the game, however, was the joy of being able to meet and play with the young "stars" of the Oratory. For José Alfonso Pérez Mejía, for example, it was a great thrill to return to the Oratory, intensely relive the memories of his childhood and those moments in which he could count on the support of Fr José Hiram Huerta. He recalled, in fact, when he was a child and this priest was waiting for him with a ball, urging him to play, leading him to consolidate his life as a professional footballer. He then spoke of all the work and effort of the catechists and leaders and was happy to meet them again.

Among the Puebla players, their smile was the hallmark, as was their cordiality and proximity. They made themselves available to everyone, autographed balls, photographs, jerseys and much more. They also had selfies taken with their many admirers, including those who played as adversaries, or the Oratory leaders. It was thanks to the efforts of the oratory leaders that, over the years, true football talents such as José Alfonso Pérez, Rafael Tendilla and Antonio Brito have emerged from the Don Bosco Oratory.

The players, together with the President of the Municipal Council of Puebla, stated that spaces like the Oratories are important, because they offer young people a great opportunity to develop as good citizens and as promoters of peace.

Finally, dinner was offered to the President and to all the players of the "Legends of Puebla" team. Everything took place in the house of Don Bosco in a convivial and fraternal atmosphere, one that was typically Salesian.