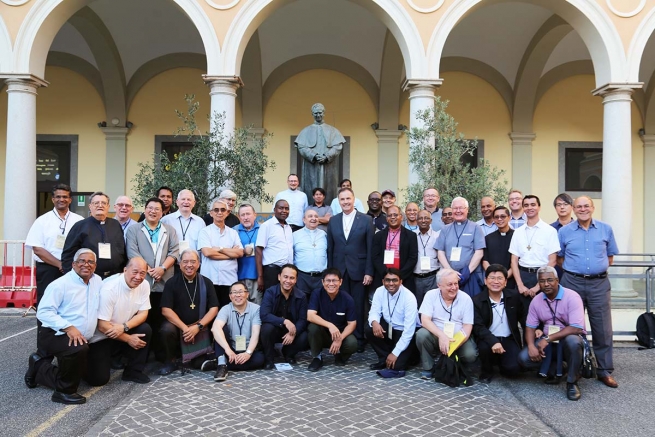 The event, which took place from 17 to 22 September at the "Pius XI" Institute in Rome, was organized in view of the forthcoming GC28.

The meeting was opened by Mass, presided by Fr Jayapalan Raphael, Delegate for the Past Pupils of Don Bosco, who invited all participants to entrust themselves to the Holy Spirit. Fr Eusebio Muñoz then presented the program and invited participants to introduce themselves and to illustrate the work being carried out in their respective Provinces. After the brief introduction, the participants were divided into five groups, subdivided by Regions, and shared the situation of the Salesian Family in the different Provinces. They discussed the strengths, the possibilities of growth, the struggles and the challenges that await the Salesian Family.

During the meeting, of note the presentations of Fr Pierluigi Cameroni, Spiritual Animator of the Association of Mary Help of Christians (ADMA), of Fr Joan Lluis Playà, Spiritual Assistant for Don Bosco Volunteers (VDB) and Volunteers with Don Bosco(CDB), which offered an overview of these two groups, and of Antonio Boccia, Coordinator of the Salesian Cooperators.

Great importance too was given to the figure of the laity. Among the approximately 500,000 members of the 32 groups of the Salesian Family, a significant part is constituted in fact by the laity. A large number of lay people from different groups of the Salesian Family shared their vision and their vocational experience: among the most important interventions were by Antonio Boccia and Renato Cursi, Salesian Cooperator, currently Executive Secretary of the DBI.

During this past week, there were also discussions on topical issues such as the family, children's education, parenting and the situation of today's youth. Speakers and Delegates of the Salesian Family discussed these issues, exchanging ideas and opinions.

In this English-speaking group, there were 35 delegates: 14 from the East Asia-Oceania Region, 8 from South Asia, 2 from Interamerica, 6 from Central-Northern Europe and 5 from Africa Madagascar.