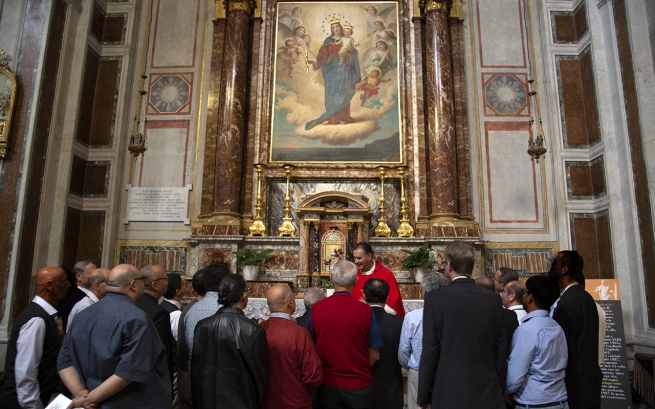 (ANS - Rome) - "Between memory and prophecy". This was the slogan that served as a guideline for the celebrations of the 25th anniversary of the foundation of the "Volunteers with Don Bosco", better known as "CDB". On September 20 and 21, 24 CDBs from 10 different countries met at the Salesian Central Office in Rome, representing the approximately 90 CDBs scattered throughout the world.

The occasion was to celebrate the XXV anniversary of the Institute's foundation. Saturday 21 September was enriched by the presence of the Rector Major, Fr Ángel Fernández Artime, by representatives of various Groups of the Salesian Family, and by Mgr. Calogero La Piana. A pleasant surprise was also the visit of Monsignor Cristóbal López, Archbishop of Rabat, recently appointed Cardinal by Pope Francis; he, in fact, is close to the Institute since, from the beginning, he has followed several young people from Paraguay who had the desire to live a consecration in the world.

During his speech, the Rector Major gave a gift of a letter to the CDB entitled "Who do you say that I am (Mt 16:15). The CDBs on the path of fidelity". The Letter shall be presented to the entire Salesian Family.

This document, which traces the experience lived by the Institute from its establishment to today, offers indications on the elements of Don Bosco's charism of special importance for Salesian consecrated secularity, several indications for the Institute's future path, as well as an invitation to the Family Salesian to commit itself to accompanying young people to the knowledge of this specific vocation.

During Holy Mass, celebrated at the Basilica del Sacro Cuore, two CDB Volunteers renewed their profession of evangelical counsels; the celebration ended with the entrusting of the Institute to the Virgin and with the blessing of Mary Help of Christians.