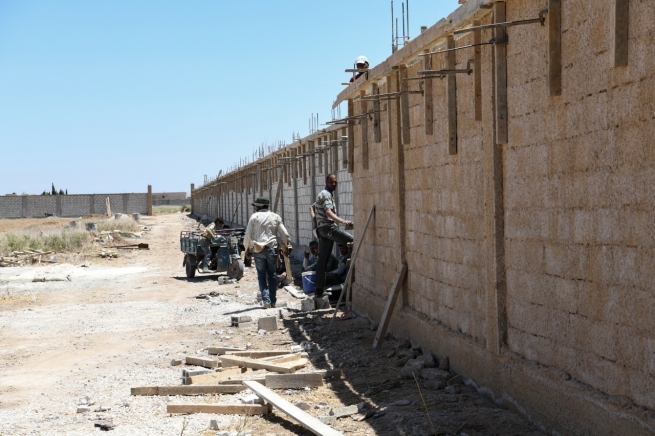 (ANS - Damascus) - For years the bullets and the blast of bombs have been the background of the Jaramana neighborhood, in Damascus. The war that Syria has been going through since 2011 has destroyed this part of the city and its traces are visible. Most of the children and young people who participate in the activities of the Salesian Youth Center in the country's capital come from this area, with 1.5 million people. Now that the war seems to have calmed down - even if these days, very close to Jaramana, large explosions have been heard - the Salesians are continuing the construction of the Youth Center, a church and a vocational training center.

For some time, the Salesians of the Middle East Province had decided to get their activities as close as possible to the most remote and needy populations. At the height of the war dramatic moments were experienced indeed with families that made young people and children get on the buses, in the middle of the bombings, running a terrible risk.

"On many occasions we have suspended the bus lines. We had the opportunity to communicate with the educators and then to inform the families," said Fr Alejandro León, Superior of the Salesian Province of the Middle East.

The district of Jaramana is located one hour from the current youth center of Damascus, due to the city's traffic. The objective of the Salesians is to move to this area, with a Muslim majority, "to open it also to the youth of that neighborhood in these difficult times in which the reconstruction of the country is beginning."

Fr León wanted to remember one of the great lessons he received from some of the children in this district. "One day when, due to the bombing, we suspended the route of the buses that took the kids to the youth center, I saw that at two o'clock in the afternoon an educator and several children from that neighborhood showed up at Mass. They had walked in the middle of the bombardments for more than two hours. At the end of the Mass I told them that I was very angry because they had disobeyed and had put their lives in jeopardy. The educator, very serene, gave me a lesson in theology and faith at the same time when he asked me who I was to forbid them from going to Mass on Sunday."

Now, with the help of many benefactors, a Salesian center will be established to accompany the formation of thousands of young Syrians affected by the war.