Sierra Leone - "Hell" by Chennu, in Freetown prison, in 22 minutes of film 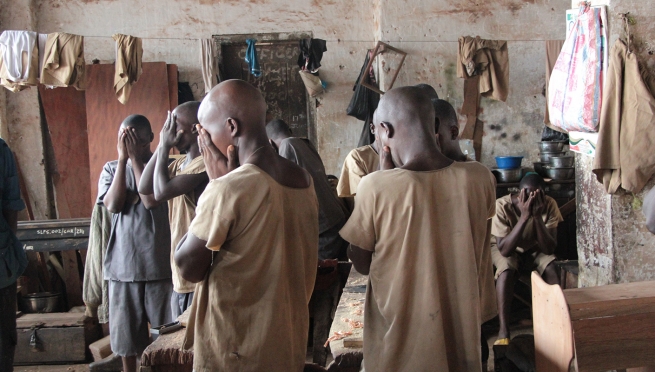 (ANS Freetown) - "Kanaki Films" is the producer of Raúl de la Fuente and Amaia Remírez who made a short film about the life of a young man from Sierra Leone who manages to change his life: from being imprisoned to being the support for young prisoners. The short documentary was screened for the first time in the "Kimuak" program of the San Sebastián International Film Festival, Spain.

"Hell" tells the story of Chennu, a street child from Freetown in Sierra Leone. At the age of 15 he entered the adult prison of Pademba Road in the country's capital. It is a film that wants to put in the foreground "the stories of those people who are dying forgotten in prison in inhuman conditions," Amaia Remírez denounces.

Furthermore, it is a story of personal overcoming focused on the protagonist, Chennu. A "very powerful" character, Remírez points out. After spending four years in prison, he manages to change his life and "Now he is dedicated to helping prisoners". "It is a complete redemption and a total overcoming of the difficulties experienced in prison." The short film was produced thanks to the support of "Don Bosco Fambul Center" of Freetown in Sierra Leone and "Misiones Salesianas" of Madrid.

One of the groups attending "Don Bosco Fambul" is the group of prisoners in the adult prison, where they met Chennu. "With this short film we want to give visibility to the work in the prison that the Salesians are doing, especially with minors and the sick."

"Kanaki Films" has been working on documentaries for several years by proxy for "Misiones Salesianas" to give visibility to the work being done in developing countries. The last film was "Love", in Sierra Leone, but also "30,000" in the Ivory Coast, and the soon-to-released "Palabek. Refuge of Hope", in Uganda.

The national premiere of "Hell" will take place at the end of October at the "Seminci" (International Film Week), in Valladolid, in the competitive short films section "Story Time". "It is an objective for us to be there," said Amaia.