East Timor - A new Archdiocese: "Let us take advantage of this initiative to unite and consolidate Catholics" 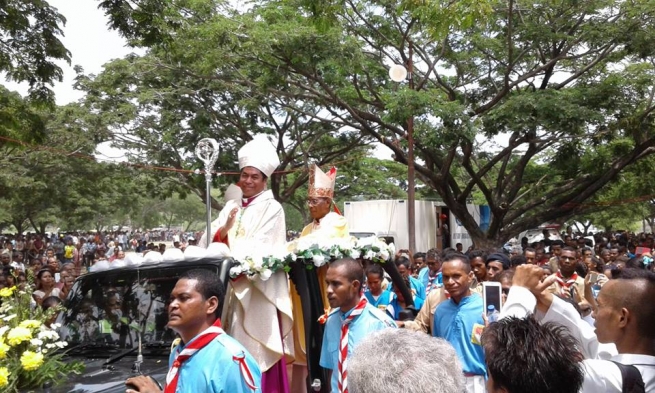 (ANS - Dili) - In 2002 a new state was born in Asia. It featured a very young population, but with high rates of inequality, rural poverty, and extremely vulnerable to climate change. Among the waters that bathe Australia and Indonesia, there is this small island divided between two states that hosts large reserves of gas and oil and that hides a complex history: East Timor, where the Salesians have been working since 1948. In the capital Dili, a Salesian is present: Msgr. Virgilio do Carmo da Silva.

By electing the new ecclesiastical province of Dili (capital of East Timor) on 11 September 2019, the Church consecrated the dynamism of a small country whose population is 97% Catholics, a country whose natural resources attract the attention of the nearby powers.

Seventeen years after gaining its independence, East Timor has become an ecclesiastical province. The Holy Father erected the Ecclesiastical Province of Dili (East Timor), elevating the diocese to the category of Metropolitan Church, having as suffragan Churches the dioceses of Baucau and Maliana, and he appointed as first metropolitan Archbishop Msgr. Virgilio do Carno da Silva, Salesian, current bishop of Dili. "Let us take advantage of this initiative to unite and consolidate the Catholics of East Timor, to grow more in the faith," declared the new archbishop.

A former Portuguese colony, East Timor has a total of three dioceses: Dili, Baucau and Maliana, with a population of 1.3 million, of which 97% are Catholics. Erected in September 1940 by Pius XII, the diocese of Dili depended on the diocese of Macao. After the violent annexation of East Timor to Indonesia in 1976, Pope Paul VI decided to place the diocese of Dili directly under the authority of the Holy See.

After independence, achieved through great efforts in 2002, relations with Muslim Indonesia, the power that occupied it, subsided. During the period of occupation that lasted from 1975 to 1999, between 100,000 and 300,000 people were murdered.

East Timor has become a much coveted economic partner in the region. And for a good reason; the country is sitting on a “gold mine”: the already exploited, but still largely untapped reserves of offshore natural gas and oil whetting the appetites of the Chinese and Australian powers.

Raising it to the rank of Ecclesiastical Province, the Holy See has thus strengthened the independence of one of the world's youngest Catholic states on the international scene.