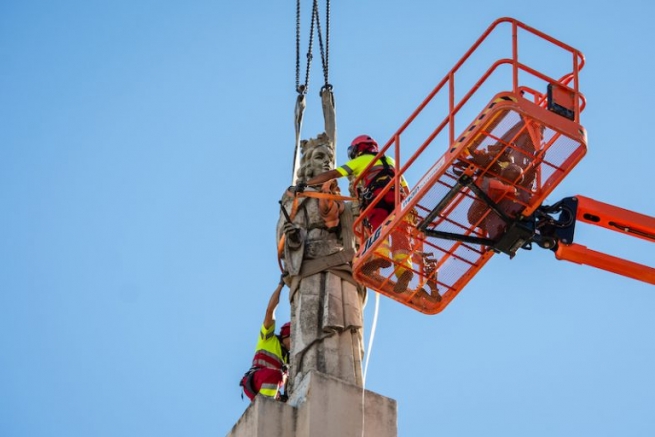 (ANS - Pamplona) - The statue, three meters high and weighing four tons, was moved from the top of the 12-meter-high tower of the Salesian house in Pamplona to be taken to the new center of Sarriguren in the Egües Valley, in Navarre. In the first week of September, about 930 students inaugurated this new educational center and the image of Mary Help of Christians, who had been in the old center of Pamplona for 60 years, could not but be present. This statue will now in fact be transferred to the new Salesian educational center.

Yesterday, 30 September, after a few hours of work, in the middle of the afternoon, a crane removed the statue of Mary Help of Christians from the top of the tower of the Salesian church on Calle Aralar in Pamplona, and is now waiting to be moved to the garden of the new school built in Sarriguren.

The statue, more than three meters high, was carved in stone by Aureo Rebolé Egüaras, originally from Aibar (Navarra), who was called the "imaginero" of the 20th century in his native land. Rebolé (1936-1994) was an expert in sculpting stone.

Perhaps the sculptor's personality is still present in the statue. Sixty years after its creation, during which Mary Help of Christians watched over the roofs of the city, the expression of Mary and the Child have remained intact.

The image was blessed and enthroned on 31 May 1959 in an act presided over by the archbishop and the patrons of the sculpture, Modesto Liquiniano, then mayor of Narvarte, and his wife Elena Arrechea.

When the image of the Virgin was taken down the street of Via Aralar, some members of the Salesian Family, together with the Salesians and some citizens, took the opportunity to take photographs with the statue.

Throughout the day the workers were accompanied by several members of the Salesian Family and by Past Pupils who came to share their memories, but also by curious people who appeared on their balconies. "I followed how they dismantled the statue," said the president of the Red Cross of Pamplona. "I feel very sad because it was the image I saw every morning from my window."

At the end of the day, the workers took the statue to restore it. One of the bells was also pulled down,and this year it shall ring in the new bell tower of the Church of Mary Help of Christians in Sarriguren.