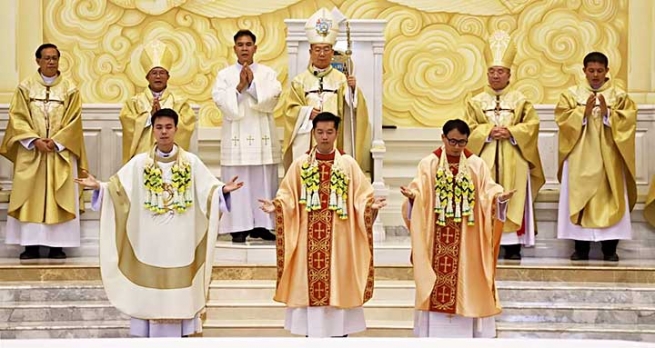 (ANS - Surat Thani) - Mons. Joseph Prathan Sridarunsil, Salesian, bishop of Surat Thani, celebrated the 50th anniversary of the Diocese of Surat Thani at the Cathedral of the Archangel Gabriel on 28 September. Also present at the solemn celebration was Archbishop Paul Tschang In-Nam, Apostolic Nuncio in Thailand. On this occasion, moreover, there was the ordination of three new deacons.

The Diocese spiritually prepared itself for a year, before this celebration. In fact, preparation began in September 2018. For a year, the statue of Mary Help of Christians was taken on a cart to the various churches belonging to the Diocese. The use of the cart is a reference to the early years of the Diocese when Archbishop Carretto, the first ordinary bishop of Surat Thani, inspired by a vision, brought Our Lady to all the corners of southern Thailand.

"I would like to thank the Lord for having sent the missionaries, especially the Salesian missionaries," said Mgr. Joseph Prathan Sridarunsil. "We also thank the Stigmatine Sisters and Sisters, handmaids of the Immaculate Heart of Mary, who have thrown here the seeds of the Word of God. The Lord has sent here some groups of the Salesian Family, such as the FMA and the Daughters of the Queenship of Mary Help of Christians, and many other Congregations, with which the Salesians have worked: the Franciscans, the Marist Fathers, the Redemptorists, the Sisters of St Paul de Chartres, the Daughters of Charity and the Capuchin friars. Everyone came to help to water, shovel, grow the seeds of God's Word," he added.

Bishop Joseph Prathan Sridarunsil then urged to pray to the Holy Spirit, who inspired many lay people of good heart to join the work "in the Vineyard of the Lord".

The Diocese of Surat Thani, in southern Thailand, was founded in 1969, when it was separated from the diocese of Ratchaburi, following the papal bull Qui Regno Christi, issued by Pope Pius VII. It is a suffragan Diocese of the Archdiocese of Bangkok. The area of ​​Surat Thani has been evangelized by the Salesians of Don Bosco since the 1930s of the last century.

The diocese covers an area of 76,562 km², covering all the southern provinces of Thailand. In 2018 it was estimated that of its nine million inhabitants, 7,678 (0.1%) are members of the Catholic Church. The Diocese is divided into 44 parishes, grouped into four regions.