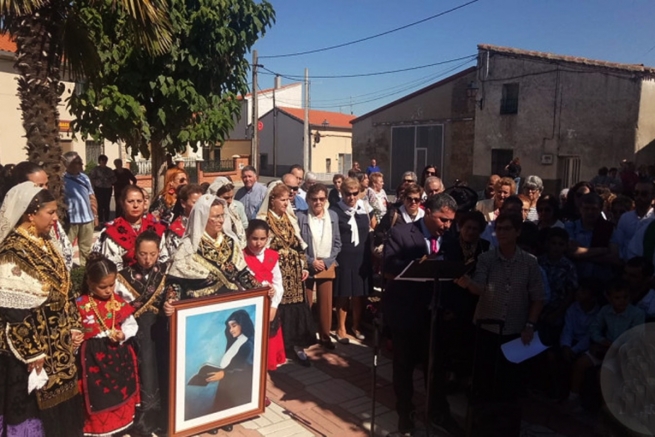 (ANS - Salamanca) - The inauguration of the Spirituality Center named after her was held on 29 September in Cantalpino (Salamanca), the birthplace of Blessed Eusebia Palomino, FMA. It was a great day for Cantalpino, which began with a solemn Eucharist in the parish of San Pedro de Cantalpino, which pilgrims filled.

The Eucharist was presided by Fr Eugenio Alburquerque, SDB. He thanked all the participants and especially Blessed Eusebia Palomino for being present when, five years ago and after two serious operations, the doctors had given him little hope of life.

The Mass was concelebrated by Fr Samuel Segura, SDB, Vicar of the “St. James the Greater” Province, and Fr José Antonio Hernández, SDB, Delegate for the Salesian Family, together with the Salesian directors of the two communities of Salamanca.

Hundreds of pilgrims, belonging to the various groups of the Salesian Family, came from many different places, from Lugo to Fuenlabrada.

After the Eucharist, full of gestures and signs towards the people and pilgrims, the participants went to the square of the "Blessed Eusebia Palomino", giving life to what was the first pilgrimage. The local Cantalpino press reported the most significant moments of this pilgrimage.

After the official proclamation and blessing of the new premises, a visit was made to the new Spirituality Center. "We were so many that it took a long time for all of us to see what we already knew and discover what was new, especially the Chapel and the many memories that fill the walls, recalling the most famous Daughter in the city," said Fr José Antonio Hernández, Delegate for the Salesian Family.

Sister Isabel Pérez, Vicar of the FMA, thanked all the people who collaborated to make the Center a reality, even if many details are still missing and everyone's contribution is still needed. Among the many names that deserve to be remembered, Sister Feli Ruano and Sister Nati Postigo, "as visible hearts of this gift to the life and history of the Salesian Family in Spain and in the world," concluded Sister Isabel.

After a simple moment of sharing, the inauguration ended with representatives involved in the project who shared a fraternal meal together. "May Blessed Eusebia Palomino, as many of us say when we get behind the steering wheel, accompany us on the road," said the Delegate for the Salesian Family when he left Cantalpino.