Vatican - Cardinal Baldisseri: "An important Synod for the Church that lives in the Amazon and for the future of all humanity" 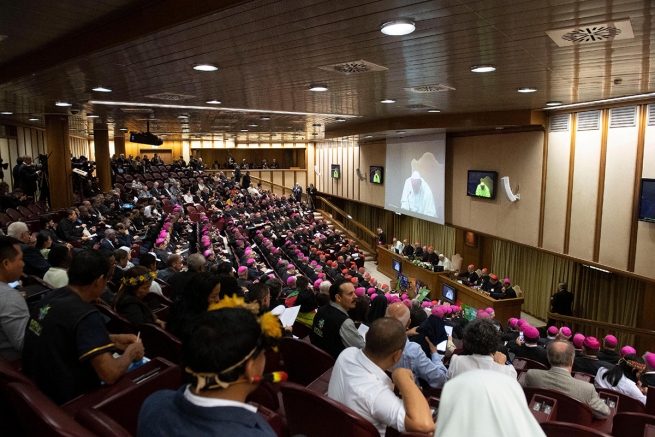 (ANS - Vatican City) - Those who leaf through the pages of the history of the great missionaries of the Amazon, find true stories of missionaries who live side by side with the tribes and the Amazonian communities. "The church has always been in the Amazon," said Fr Giovanni Botasso, SDB. "It is right," declared Cardinal Claudi Humes, speaker and President of the Synod,  "to remember, acknowledge and exalt, in this Synod, the history of heroism, and often of martyrdom, of all the missionaries of yesteryear, and also of those who today are in the Pan-Amazonic Region."

The words of Cardinal Lorenzo Baldisseri, Secretary General of the Synod of Bishops, are therefore representative: "I sincerely thank Your Holiness for having wanted to entrust to the Synod of Bishops the reflection on a subject of such extraordinary magnitude for the Church that lives in Panamazzonia and for the present and the future of all humanity."

At the beginning of the Synod, it was emphasized that the history of the Amazon was marked by martyrs, who gave their lives to announce the Gospel and denounce injustices. The Salesian Rodolfo Lunkenbein and the lay Simão Bororo (1976) are commemorated, but we cannot forget the names of Marçal de Souza Tupãi (1983); Ezequiel Ramin (1985); Cleusa Carolina Rody (1985); Josimo Moraes Tavavavares (1986); Vicente Cañas (1987); Alejandro Labaka and Inés Arango (1987); Chico Mendes (1988); Galdino Jesus dos Santos (1997); Ademir Federici (2001); Dorothy Stang (2005) and with them the thousands of lay people, religious and priests who give their lives every day.

Yesterday afternoon, 7 October, the 176 members of the Synod elected the members of the various Commissions. Monsignor José Ángel Divassón Cilveti, a Salesian from the Apostolic Vicariate of Puerto Ayacucho (Venezuela) was also elected to the Information Commission.

This event has four dimensions on which to reflect: the pastoral, the cultural, the social and the ecological. Among these, the Pope said, "the first, the pastoral dimension, is the essential one, the one that includes everything. We face it with a Christian heart and look at the reality of the Amazon with the eyes of a disciple to understand it and interpret it with the eyes of a disciple of Jesus."

At the end of the afternoon, Sister Teresa Cediel Castillo, of the missionaries of Mother Laura, emphasized that the presence of women in the Amazon is essential to proclaim Jesus Christ "because there are few priests ... and we are a constant presence."