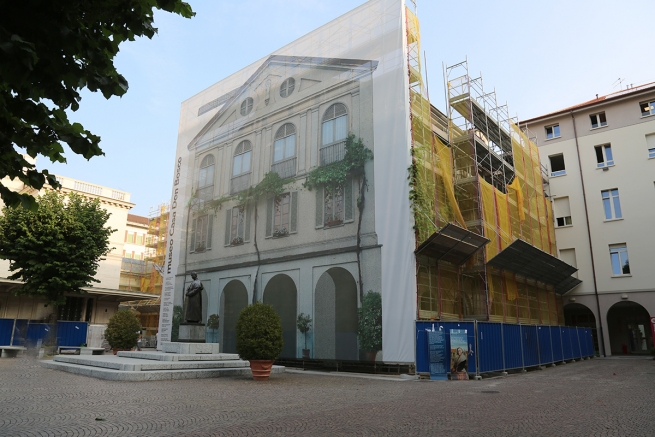 (ANS - Rome) - It was last May 24, the day of the Feast of Mary Help of Christians, when Giampietro Pettenon, president of Missioni Don Bosco, explained the project "Casa Don Bosco", a new space that will be inaugurated in 2020, to ANS.

The pilgrims who arrived in Valdocco last May 24th had no doubt noticed the large construction site, which involved the bedrooms and the whole building of Casa Pinardi, including the church of San Francesco.

The Rector Major, Fr Ángel Fernández Artime, in fact, following the request of the 27th General Chapter, with the intention of adequately appreciating the value of Salesian historical sites, personally took up the commitment to build a new museum, precisely "Casa Don Bosco". It will rise right in the place and in the buildings that Don Bosco himself had built to welcome boys to Valdocco. A part of the museum will be opened during the GC28, while the other areas will be made available in the course of 2020. The opening of the new museum represents a unique opportunity to rediscover Salesian history and the places in which Don Bosco lived and worked.

The recovery of these new spaces is told in two videos wherein Mr. Pettenon not only illustrates the project, but takes the viewer into the building site itself, where masons and workers are working to bring these places back to light, places fundamental to our Salesian roots. During the restoration work, which began in May of this year, the workers discovered a basement built by Don Bosco with his fellow Salesians and young people. In the videos, Mr. Pettenon shows us the elements that have remained intact, such as the oven, the well, the old pulley and even the ladder that connected the basement to the attic, where there were small rooms, daily traveled by Don Bosco, by Mamma Margherita, by Father Rua and St Domenico Savio.

With the opening of this construction site, therefore, more Salesian history emerges and the places of Don Bosco's everyday life uncovered. It is clearly a very important discovery for the Salesians and the Salesian Family from all over the world.

There shall be two videos to explain the "Casa Don Bosco" project, both presented by Mr. Pettenon. To these a third will be added, which will instead focuses on Colle Don Bosco. The first video is already available in 5 languages ​​on ANSChannel which, as already mentioned, has been renewed. The videos will in fact be uploaded in the different channels, divided by language, so as to facilitate the user to find the audiovisual materials in the language they prefer.