Guatemala - "How did you move all my work from Valdocco to this distant place?": Valdocco of San Pedro Carchá 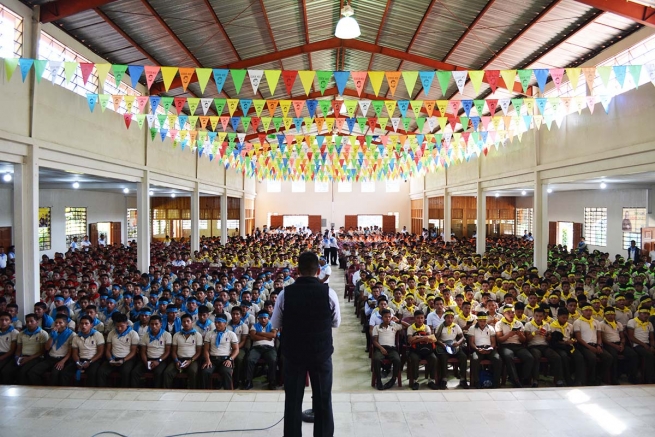 (ANS - San Pedro Carchá) – Over thirty years ago, in a desolate place in northern Guatemala, lived a young Salesian priest whose name we must never forget. His name is Antonio De Groot. From a faraway Australia he was brought by destiny - which we call Providence - to work in that hot and inhospitable corner of the third world. Like the magician of that story, he fascinated the young, not with a flute, but with a guitar and accordion.

One day a young man appeared in his rudimentary house, almost like a native Bartolomeo Garelli, and made him a naive proposal: "Father, I want to live in your home so you can teach me to read."

He was not a child, but a young man, illiterate and poor.

Soon another young man arrived, and then another, and another. In a short time a group of enthusiasts formed, who wanted to learn. They settled here, worked the adjacent land and accompanied the priest on his visits to the villages. At night they were passionate about the mystery of those first letters.

The small home of Father Antonio, little by little, had to be enlarged to accommodate those who continued to arrive. The small and singular "school" of just one single teacher began to take shape until it took on a new name: Don Bosco Center.

Thirty-seven years later, that oratory in the style of Don Bosco became a giant tree with three huge branches: the first in Raxruhá, the second in San Juan Chamelco and the third in Tzacanihá, on the outskirts of San Pedro Carchá. The latter is the mother of the other two.

The three colleges host 2,000 elementary and high school students. There, the children learn in the masonry, electricity, carpentry, carpentry, IT and music workshops.

"A Salesian house without music is a body without a soul". In the Don Bosco Centers, in fact, music occupies a privileged place: there are three bands with 184 performers, numerous guitar groups, and choral songs for powerful voices with more than a thousand young people.

This youth group is attended by extremely poor young people. Education is free, although some contribute modest amounts. The three centers also include 17 soccer fields, 10 basketball courts and 18 volleyball courts.

To get a rough idea of ​​the size of these Salesian centers, suffice it to say that every day thirty thousand tortillas are consumed, the basic food of indigenous peoples, prepared by neighboring families.

If Don Bosco were to visit this Salesian jewel, he would probably wonder: how did you move all my work from Valdocco to this distant place?