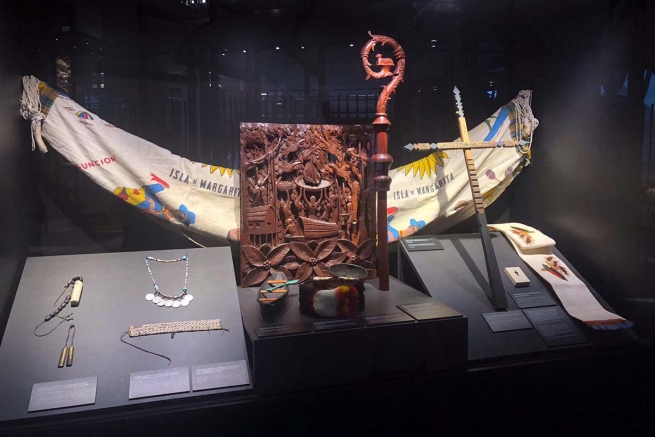 (ANS - Vatican City) - On the occasion of the Special Synod for the Amazon called by Pope Francis, the exhibition "Mater Amazonia - The deep breath of the world" has been set up at the Vatican's Ethnological Museum "Anima Mundi" (Vatican Museums). The inauguration is scheduled for October 18th and it will be possible to visit the exhibition until 11 January 2020.

This is an important collaboration between the Consolata Missionary Institute and the Salesians of Don Bosco. The two Congregations participated through the loan of objects from the collections of the two respective museums: the "Missioni Consolata" Ethnographic and Natural Sciences Museum of Turin and the Ethnological Missionary Museum of Colle Don Bosco.

According to the scientific project outlined by Elisabetta Gatto, anthropologist, three themes were chosen to best narrate the environment and the populations of the Amazon: the river, the forest and the "maloca", or the community house.

Objects from the two museum collections that best represented these themes were selected. They are objects that speak of daily life, of ritual, but which also bear witness to the meeting with missionaries: a showcase, in fact, was dedicated to the theme of inculturation.

Within the framework of the exhibition are the portraits and names of some of the missionaries who lived with the Amazonian peoples. For the Salesian Congregation: Sister Maria Troncatti, FMA, missionary among the Shuar in Ecuador from 1922 to 1969; Fr Luigi Bolla, SDB, missionary since 1953 for 30 years with the Achuar in Ecuador and 30 years in Peru; Fr Luigi Cocco, SDB, a Salesian missionary who lived from 1951 to 1974 in the Sierra Parima, Venezuela.

The Indios Cappuccini Missionary Museum in Amazonia (MUMA) of Assisi and the Museum of Chinese and Ethnographic Art of Parma also collaborated with the loan, without forgetting the objects of the collection of the Vatican Ethnological Museum "Anima Mundi" which hosts this temporary exhibition.