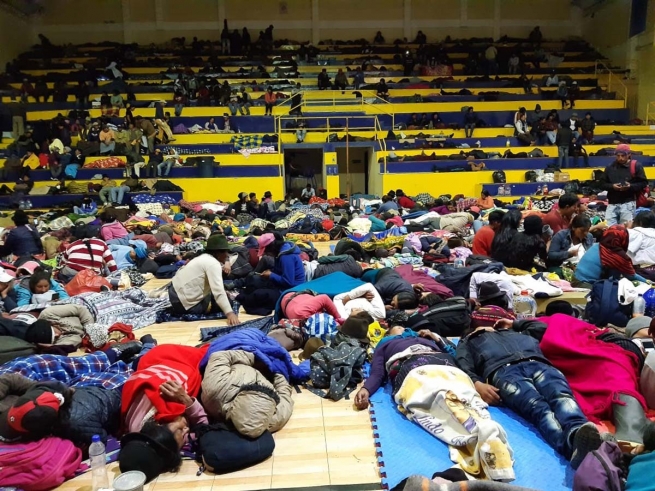 (ANS - Quito) - The economic and social crisis that has intensified in Ecuador in recent weeks has triggered a wave of protests and repression by government forces. In this context, solidarity initiatives are taking place to assist the thousands of indigenous people who have come to the country's capital, Quito, to defend the rights of those most in need. The Salesians have opened the doors of the Salesian Polytechnic to welcome and assist over 3,000 people from all over the country.

The money of the International Monetary Fund (IMF) to alleviate the severe economic crisis in exchange for harsh economic measures by the government have turned the country into a powder keg and the population has taken to the streets to demonstrate in front of these measures that damage the most vulnerable.

The transport strike, which paralyzed the country, and the mobilization of more than 40,000 people from the various indigenous communities of Ecuador, have put the government on the rails, which has moved the country's capital to Guayaquil and decreed curfew in various areas to try to curb citizens' mobilizations.

The Salesians who, since their arrival in Ecuador in 1888, have long distinguished themselves by the care and accompaniment of indigenous communities, fostering efforts to preserve their culture and their traditions, have in this context recently opened the doors of the Salesian Polytechnic University to accommodate more than 3,000 people in its gardens and gym so they can have a place to rest.

"Solidarity initiatives have been organized to obtain mattresses and blankets, take turns in the makeshift infirmary for the occasion, and to cook food for them," said one of the members of the educational community.

These people arrive at the Salesian center already tired from their long marches, and many of them are also injured by tear gas with which the police respond to their protests. Initially the gymnasium of the Salesian university was made available to the indigenous, but the massive arrival of people in recent days has made it necessary to furnish even the courtyards, the gardens and any place available to offer rest and shelter to those who want to peacefully claim their own rights and defend their country.

"The Salesians have opened their doors from the heart, as they have also done on previous occasions of conflict, in favor of the indigenous communities of the Amazon, the Sierra and the Afro-Ecuadorians, as one big family. We do not want there to be bloodshed, let alone deaths, but that peace and social justice are imposed as arguments against purely economic interests," said one of the young people helping the natives as a volunteer.