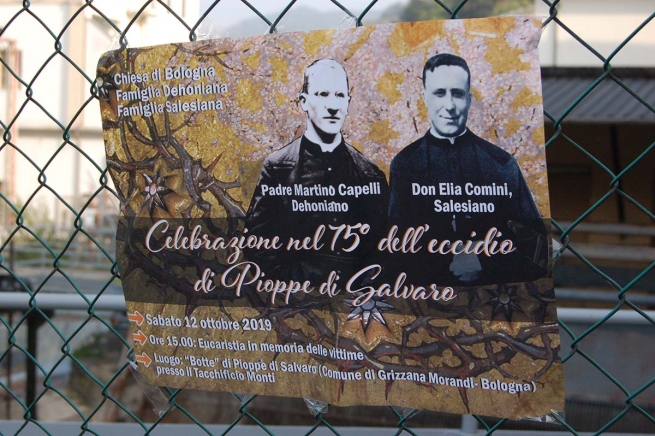 (ANS - Bologna) - Among the various commemorations scheduled for the occasion of the Monte Sole massacres on the Apennines near Bologna, which took place between September and October 1944 by the Nazi SS, there was also one in memory of the Servants of God Fr Elia Comini, Salesian, and Fr Martino Capelli, Dehonian, held on 12 October at the "Botte di Pioppe di Salvaro" (Bologna). Presided by Fr Carlos Luis Suárez, Superior General of the Dehonians, it saw the presence of over 60 concelebrants, of the Christian and civil communities, and relatives of the victims.

After the greetings of the Vicar General of the archdiocese of Bologna, Msgr. Stefano Ottani, Fr Francesco Cereda, Vicar of the Rector Major, in his homily recalled the testimony of Fr Elia and Fr Martino: "an encouragement in walking the path of holiness that finds a fruitful expression in heroic charity and generous service unto the very last: they were shepherds who did not abandon the flock when the wolf came to steal the sheep."

The offertory procession was the chance to remember how the morning of September 29, 1944, Fr Comini and Fr Capelli rushed to rescue the victims of Creda and faced the Nazi fury dressed in nothing but "priestly weapons": the stole, the oil of the sick, the breviary, bread and wine.

After the Eucharist, during the procession to the "Botte", place of the massacre, the litanies of the Madonna were sung, recalling what Fr Comini did together with the victims of the massacre on the evening of October 1, 1944, when he realized the purpose of his first Mass: "All those who approach me must have met not the scholar, not the man, but the priest, the minister, the servant of Jesus."

On October 8, at the request of the Congregation for the Causes of Saints, Fr Pierluigi Cameroni, Postulator General, presented the Postio suppletiva super martyrio of Fr Elia Comini, curated by Dr Lodovica Maria Zanet, having Mgr. Maurizio Tagliaferri as thesis supervisor.

In his reply Cardinal Becciu replied that the passage of the Cause of Fr Elia Comini from super virtutibus to super martyrio "is not only possible, but is timely appropriate for the respect due to historical truth."