Vatican – Mons. Divassón Cilveti, SDB: "Christianity preserves the good that exists in every culture by helping peoples to grow" 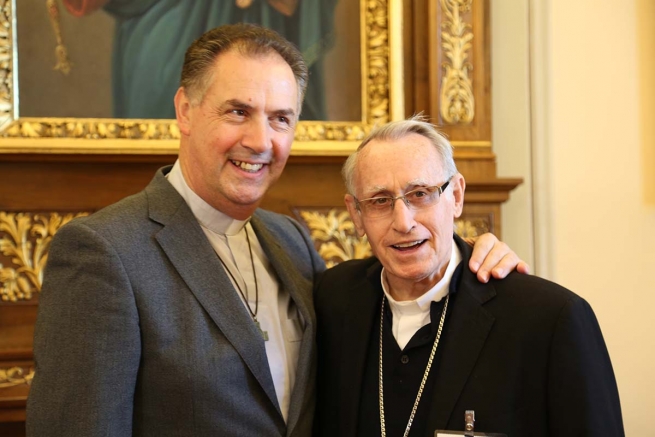 (ANS - Vatican City) - In these days of the Synod for the Pan-Amazon region, what is deepened in the halls and classrooms often emerges also in the press briefings. Monday, October 14, Msgr. José Ángel Divassón Cilveti, former apostolic vicar of Puerto Ayacucho, Venezuela, spoke to the media about Salesian work among the Yanomans and how much evangelization can accomplish in different cultures.

"As Salesians, we have been present among the Yanomami, along the border between Brazil and Venezuela, since 1957. At first, our missionary action was still affected by a certain paternalistic and sacramentalist character," said the Salesian prelate.

However, the initiative of the Salesians changed over time. "The Council," he continued, "opened a new season. We decided to share the life of the communities with profound respect, knowing that it was the Yanomami who had to take the reins of their own future. We have limited ourselves to helping them do so, promoting education, projects that make them economically independent, the defense of their rights."

The Salesian prelate also spoke about how the process of evangelization was carried out: "We understood that in order to evangelize we had to know the Yanomami, their feelings, their dreams. With the first group, the preparation path went on for nine years. Some have left. Others arrived at Baptism and have been the seed of a Yanomami Church."

The proclamation of the Gospel, he added, only brought good to the natives: "The Gospel takes nothing away from their identity. Christianity preserves the good that exists in every culture while helping people to grow ... In the past, if you had killed someone, you were killed. And so began the continuous battles ... In that culture forgiveness was difficult, yet these people realized that having the ability to forgive solved so many problems!"

Finally, regarding the dangers that threaten the natives in the Amazon, Msgr. Divassón Cilveti denounced their poor condition and "Not to mention those that were massacred for land exploitation or mining activities. In the Amazon there are 35 multinationals that work without control and without authorization."

It should also be noted that yesterday, 15 October, Pope Francis completed the drafting committee for the final document of the Synod, appointing 4 to the 9 members already identified. Among them are two Salesians: Fr Rossano Sala, Professor of Youth Ministry in the UPS and Director of the Note di Pastorale Giovanile magazine, and Msgr. Edmundo Valenzuela, archbishop of Asunción, Paraguay.