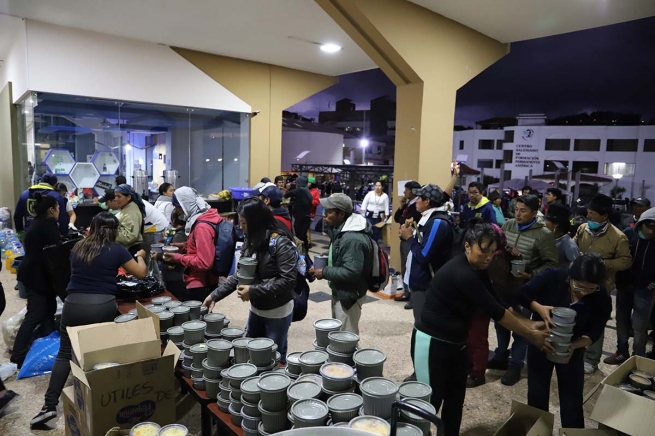 (ANS - Quito) - The Salesian House of Spirituality "San Patricio", located in Cumbayá, Quito, was the venue for peace talks between the National Government and indigenous organizations. The trust and security offered by the Salesians and their works was the reason the UN, through a representative, opted for the center of Don Bosco's spiritual children.

For reasons of national security, the process of logistics and organization of the talks were kept confidential until the end of the event.

Going back over what happened recently, of note the demonstrations beginning on Tuesday 8 October, followed by several days of mass protests against the latest economic measures adopted by the government. Salesian centers were sites of peace and humanitarian that welcomed over 4,500 indigenous people from the Sierra area and from the eastern areas of Ecuador.

From Tuesday 8 to Monday 14 October, the Shrine of Mary Help of Christians has become a focus of attention for people and the distribution of goods that the Church and the population of Quito, together with many people from other provinces and nations, wanted to donate.

As many as 93 volunteers, along with 35 doctors and paramedics, took care of different sectors: cooking, clothes, personal hygiene items, dispensary and medical care, cleaning, child care and health. The volunteers self-summoned themselves and, with competence and Salesian spirit, catered to the needy population. The Shrine of Mary Help of Christians was thus a "sanctuary" in the radical sense, that is, a place of "protection", of Salesian humanitarian aid.

Furthermore, the Salesian Polytechnic University, through the Federation of Students, teachers and administrative staff, was the protagonist of humanitarian aid and solidarity given in all these days.

Salesians like Fr Javier Herrán, Rector, along with Rómulo Sanmartín, Jaime Chela, Robert García, just to name a few, accompanied the population through diverse fields, as "pastors committed to our people", as expressed by Msgr. Alfredo Espinoza, SDB, archbishop of Quito.
Fr Francisco Sánchez, Superior of the Salesians in Ecuador, made an official statement before civil society, issuing a statement in which he reaffirmed his commitment to accompany indigenous peoples as a priority option for the Salesian mission, and asked the national government to look for different options regarding economic measures.