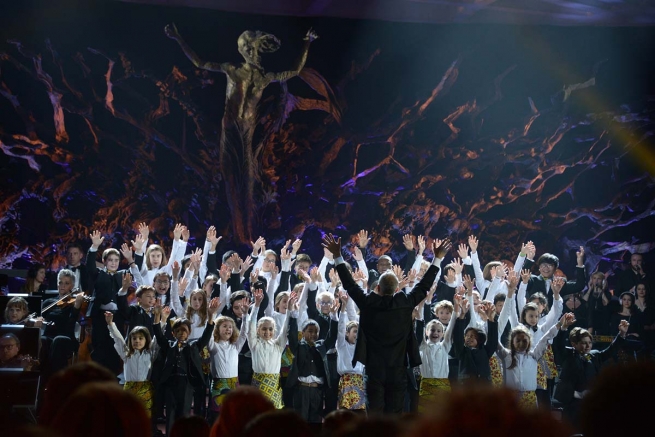 (ANS - Vatican City) - "Let's network for the Amazon": the echo of the current Synod in progess also reaches the 27th edition of the Christmas Concert in the Vatican, the event promoted by the Vatican Congregation for Catholic Education in support of "Don Bosco Missions" and of the Pontifical Foundation "Scholas Occurrentes", presented Tuesday, October 15th, in the Sala Marconi of Palazzo Pio.

The secretary of the Congregation, Msgr. Angelo Vincenzo Zani; the Salesian brother Giampietro Pettenon, President of the "Don Bosco Missions"; Josè Maria del Corral, President of "Scholas Occurrentes"; Fr Davide Banzato, a priest who is often active on Italian TV networks; Ernestina Macuxi and Hosana Purubora, of the "Indigenous Missionary Council", all spoke of the importance of preserving the Amazon because "Mother Nature needs her lung".

During the event "Let's network for the Amazon" was shown, the common charity project that includes two specific interventions: one of an educational nature for the students, which will be carried out by "Scholas Occurrentes" to raise awareness among the students of the 450,000 schools in the world belonging to the “Scholas.social” platform, promoting reforestation activities in the same schools and institutions.

The other is by "Missioni Don Bosco", which will go directly to support the indigenous population in the degraded district of Iauaretê, northwest of the Brazilian Amazon, on the border with Colombia, in an area where the Salesians have been present for 90 years. The project aims to preserve the presence, tradition and culture of the indigenous population, also helping it to preserve itself from the scourge of alcohol. "Working with children and educating them means involving parents too, in an awareness-raising work, especially towards women. It is an education that starts with the kids, but that also reaches parents who, in turn, are mostly young people, ”explained Br Pettenon.

The project aims to eventually create "a home for these children, so that they find a dining room and a room to sleep" when the family is not able to care for them.

In favor of the charitable cause, also this year the cast of the concert, produced by Prime Time Promotions, confirms to be of great prestige and, at the moment, foresees the presence of Lionel Richie, Bonnie Tyler, Susan Boyle, Elisa, Mahmood, Simone Cristicchi, Fabio Rovazzi, Noemi, Davide Merlini …

The Italian charity telephone number 45530 will be active in support of the projects from 2 November to 31 December.

The Christmas concert will be broadcast in Italy and around the world on Canale 5, the evening of Christmas Eve and, re-broadcast, on the afternoon of December 25.

Tickets can be purchased online at www.concertodinatale.it or at all TicketOne outlets. For information and reservations, call +39 06 68136738. All proceeds from ticket sales and SMS solidarity donations will go to the Scholas Occurrentes Foundations and the Don Bosco Valdocco Missions.