Poland - "With gratitude we look at the past, to build the future" 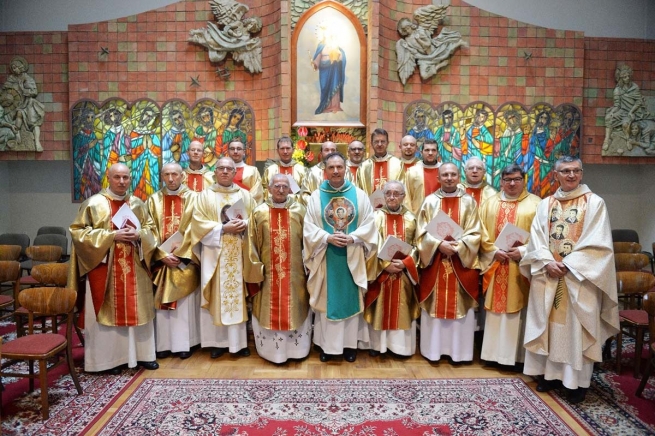 (ANS - Warsaw) - A brief visit, but full of meaning and perspective, describes the trip of Rector Major, Fr Ángel Fernández Artime, to Warsaw between last Friday and Sunday (18-20 October) on the occasion of the Salesian Province's 100 years. Among the various important meetings held by the X Successor of Don Bosco, highlights include meeting the President of the Republic of Poland, Andrzej Duda. The theme of the various events was given by the appreciation and gratitude towards Salesian education.

Already in his first official appointment, with Msgr. Salvatore Pennacchio, Apostolic Nuncio in the Country, Fr Á.F. Artime welcomed the words of the bishop who, with a long experience behind him, emphasized that he knew the Salesian world well, having observed it first hand in different countries, and he expressed his appreciation for the Salesians' work in education, formation, social promotion throughout the world.

After the meeting with the Nuncio, also attended by the Councilor for Central and Northern Europe, Fr Tadeusz Rozmus; the Provincial of Warsaw, Fr Tadeusz Jarecki, and the Secretary of the Rector Major, Fr Horacio López; Fr Á.F. Artime met the Polish President before a large delegation from the Salesian Family.

In their cordial conversation, the Rector Major and the President of Poland touched on the theme of education, and here too the gratitude for the Salesians' work emerged: both at the general level, for everything accomplished in this field in the last 100 years; and with a personal note when the President recalled that as a young man he used to attend the sports field run by the Salesians with his friends, declaring he had always felt welcomed and very much at home in that environment.

Also on Friday 18, the Rector Major gathered with several Polish prelates, starting with the cardinal and archbishop of Warsaw, Kazimierz Nycz. He talked with them about the centenary's theme - which opened last fall under the motto: "With gratitude we look at the past, to build the future", the event to conclude with a solemn celebration on 10 November at the Marian shrine of Różanystok.

On Saturday, then, the Rector Major continued to celebrate the 100th anniversary of the Warsaw Province by meeting young people and the Salesian Family in the city of Łódź. Subsequently he presided over a Eucharist for over 1,800 people of the Salesian Family, including about 1,200 children and young people. In his homily, he stressed the primacy of love in education. "More important than what we do is how we do it," he said, inviting us to give ourselves wholeheartedly and to use one's heart as a measure to evaluate one's own work and commitment.