Paraguay – "A million children recite the Rosary": it's the prayer of my heart 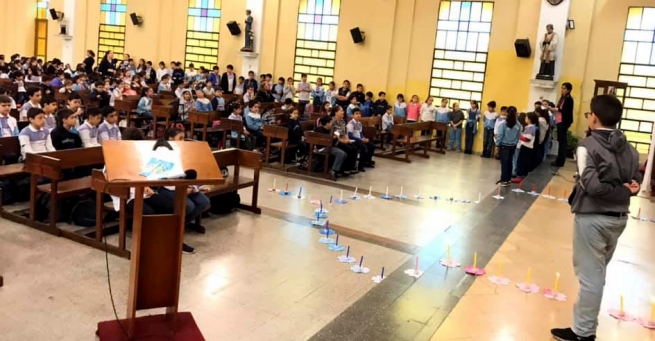 (ANS - Asunción) - In one of the most beautiful documents on the Virgin ever written, namely the apostolic letter "Rosarium Virginis Mariae", Pope John Paul II answered to the criticism of those who say the Rosary is "a repetitive prayer." The Polish Pontiff emphasized that it is a prayer perfectly suited to human nature, which needs repetition; the Rosary, then, is "the expression of love that never tires of returning to the loved one." For this reason, the children of the "Salesianito" school in Asunción joined the global initiative: "One million children recite the Rosary."

Pope Leo XIII wrote eleven encyclicals on the Rosary; Pius XII recited the rosary and called it "the Breviary of the Gospel"; Pope Francis said: "The Rosary is the prayer that always accompanies my life; it is the prayer of the simple and the saints ... It is the prayer of my heart."

"If one looks superficially at this repetition, one might be tempted to consider the Rosary an arid and boring practice. However, another consideration one can have of the Crown can be reached, if it is considered to be taken as an expression of that love that never tires of returning to the loved one," explained St. John Paul II.

The children of the Salesian schools have joined the global initiative "One million children recite the Rosary", a manifestation of faith that aims to ask the Virgin Mary for peace and unity in the world. This year the intentions were directed above all to the Extraordinary Missionary Month, praying above all for the missionaries and for the increase in missionary vocations.

The initiative of "One Million Children Recite the Rosary" was born from an incident in 2005 in Venezuela. Then a group of children was reciting the Rosary in front of a votive shrine, and some women felt the presence of the Virgin. One of them recalled a phrase from Saint Pio of Pietrelcina: "If one million children pray the Rosary, the world will change." Since then, the initiative has been revived over the years and has become consolidated as a fixed appointment on October 18th.

For Don Bosco and for the Salesian Family, reciting the Rosary is one of the fundamental legacies of the charism. When the marquis Roberto d'Azeglio visited the oratory, he said that reciting the rosary was a waste of time; Don Bosco replied: "Well, I have this habit in my soul, and I can tell you that my institution is based on it: I would be willing to leave many other very important things before this."