Italy - When the present is called future: "The School of Doing" inaugurated 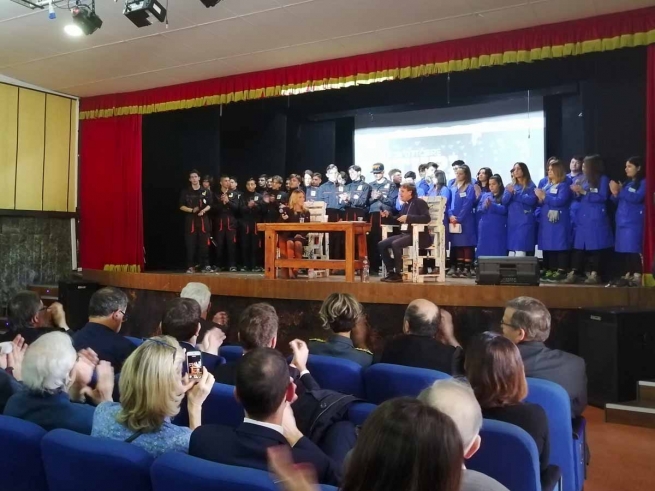 (ANS - Naples) - The first school year of the "La scuola del Fare" Vocational Training Center officially opened yesterday, Thursday 24 October, promoted by CNOS / FAP at the Salesian Institute in Naples (Italy). The inaugural event was attended by leading figures from the Salesian world, local administrations and the Third Sector, such as Vincenzo De Luca, President of the Campania Region, Chiara Marciani, Regional Councilor for Vocational Training, and Fr Fabio Attard, General Councilor for the Salesian Youth Ministry, who stated: "When a boy or girl lives in an environment where he feels welcomed, accompanied, promoted and made a protagonist, the present is called the future."

In a territorial context strongly in need of vocational training programs, the "School of Doing" shall involve 120 students who have left conventional education. It follows an approach in which "doing", or a hands-on, practical part, takes on a prevalent role in formation, together with the collaboration with national and international companies in the territory, all with a view to giving concrete answers to students' needs, also in terms of future employment.

At the premises made available by the Salesian Institute of Naples, the classrooms and workshops of the "School of Doing" will develop: over 1,200 square meters where the courses of "Motor Vehicle Repair Operator" and "Operator of Logistic Systems and Services" will take place, a training course of over 1,000 hours per year, of which more than half is reserved for workshop activities.

On the opening day, the presentation of the two three-year courses and of the teachers and educators preceded the cutting of the ribbon, with a blessing from the Superior of the Salesian Province of Southern Italy (IME), Fr Angelo Santorsola.

Then the institute's "Open Day" began, during which all the students, already attending the school for a period of orientation, guided the visitors by simulating practical lessons in the workshops.

The renovation works for the construction of the school were supported by much-appreciated collaborators who immediately embraced the project, inspired by the very Salesian educational idea of ​​"learning to learn".

Since yesterday, thanks to the Salesian commitment and skills, and the support of many different figures - Campania Region, UNICREDIT Bank, ONGs such as "Con i Bambini - With the Children", "Fondazione Alberto and Franca Riva Onlus", "San Gennaro Community Foundation" , "IF-ImparareFare", "Cometa Formazione", "Il Millepiedi Social Cooperative Society" ... - a concrete path of hope has opened up to contrast scholastic dispersion and child educational poverty, by providing a platform from which many young people may find fulfillment in life and in work.