Peru – Inauguration of two internships for young people in Kuyuntsa: "It is very important to educate a people …" 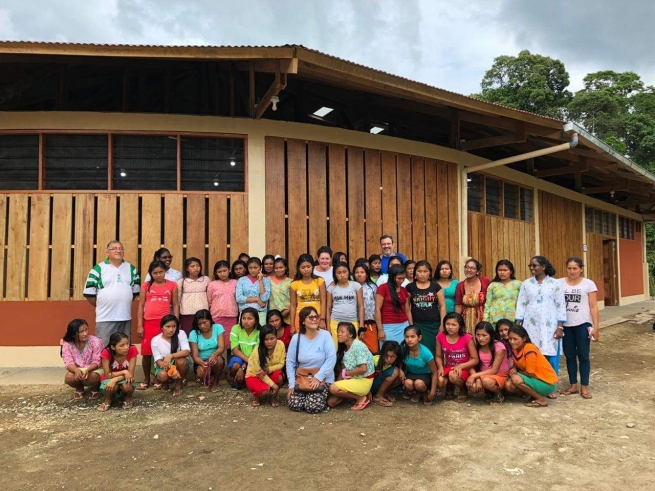 (ANS - Kuyuntsa) – Those who remember Fr Luis (Luigi) Bolla cannot but turn their gaze to "a culture that I love, and for which I have identified myself with the Achuar to the point of risking my life." When he left Ecuador and departed for Peru, he chose Kuyuntsa and Sanhiick as his residence, testifying that his only concern was to humanize, evangelize and educate. Today, five years after his departure for Heaven, Yánkuam'Jintia, as he was called, is still alive in the Salesians who continue his work and who today announce: "With joy, we can communicate that in Kuyuntsa we have inaugurated two internships, one for boys and the other for girls."

Fr Raúl Acuña describes the inauguration of the two structures for young Achuar, which took place on Saturday 12 October. "We have created, with the help of a German NGO, two internships for young people who come to Kuyuntsa to study. From a well, we've brought drinking water; we use solar energy and it is a place to train and study."

Education is the prototypical commitment of the Salesians of Don Bosco, as well as of other institutes and congregations of the Salesian Family; such as, for example, "Le Discepole", an institute founded in India by Fr Joseph D’Souza, SDB. "They will take care of this great work in the middle of the Amazon jungle, and for them we have built the community house."

Coming to Kuyuntsa for the inauguration, after not a few hours' journey along the rivers, were: Fr Manolo Cayo, Provincial; Fr Raúl Acuña, Director of the Projects Office; Ms. Roswitha Maus, Project Manager of the Salesian NGO "Don Bosco Mondo", in Bonn, Germany; Fr Diego Clavijo, a local missionary; members of the Provincial Social Communication team, the Department of Education, and many others. "These works would not have been possible without the support of Don Bosco Mondo, the Federal Ministry of Economic Cooperation and Development of Germany and the Salesian Mission Office of Peru," said Fr Acuña.

Arriving in Kuyuntsa is not easy; it is a long, difficult journey that requires sacrifices, "but it is made out of the desire to improve the life situation of the Achuar indigenous communities through education and the development of their skills," added Fr Acuña. "This is why we started cultivating on virgin land, to improve the inhabitants' diet and teach them that one doesn't eat only cassava and bananas." In a short time, the young people learned to grow rice, corn and beans and they are planting new trees.

From education also derives knowledge of their rights, why the Salesians have foreseen a special training project: "Human rights and the identity of peoples."

After more than 50 years among the indigenous peoples, the voice of Father Bolla resonates so current and present to Kuyuntsa: "It is very important to educate a people ... Thinking about the future of their communities."