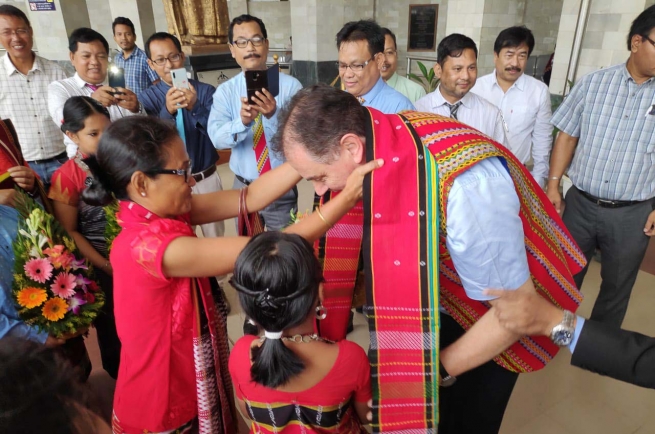 On exiting from the terminal, the Rector Major was once again welcomed by a representative group of Salesian Cooperators and Past pupils who'd been waiting outside the airport terminal. Happy faces clad in colourful traditional attire broke in to cheers of welcome on seeing the 10th successor of St. John Bosco exiting the airport greeting and smiling at them. They presented him flowers, and traditional risha as a sign of welcome and joy.

In a car arranged by the Past Pupils, the Rector Major then left for “St. Xavier’s School” in Pathaliaghat, situated 41 kilometers south of Agartala, making the first Salesian house in Tripura also the first to host the Superior General.

The Salesian Rector Major said to the young people that they must “strive to know Jesus more”. Calling it “the secret of success”, he said the extent to which we know Him, love Him and stay close to Him, so will our lives become meaningful and successful.

Fr Ángel addressed the large gathering consisting of youth, religious personnel, and parishioners that had come to welcome and listen to the 10th Successor of Don Bosco at St. Xavier’s Pathaliaghat. He was accorded a rousing welcome by youth and religious personnel from Don Bosco Udaipur, Don Bosco Nabasardar, Herma Prenovitiate and by the boarders of Don Bosco and Auxilium Boardings. A group of parishioners, cooperators and Past Pupils of the institution were also present to welcome the distinguished visitor. They presented him with bouquets and rishas.

The Rector Major also visited the adjoining Auxilium Convent and Hostel where he had lunch and continued to interact and mingle with young people and others. In memory of the historic visit, the school park was named after the Rector Major.

Although it was in the historic Parish of Mariamnagar that the Salesians began in 1991, St. Xavier’s School at Pathaliaghat, which the Salesians took over in the following year, became the first Salesian institution in Tripura.

More photos are available on ANSFlickr.