India – Fr Ángel to the Salesians: “The poor have only us. We cannot move away from them” 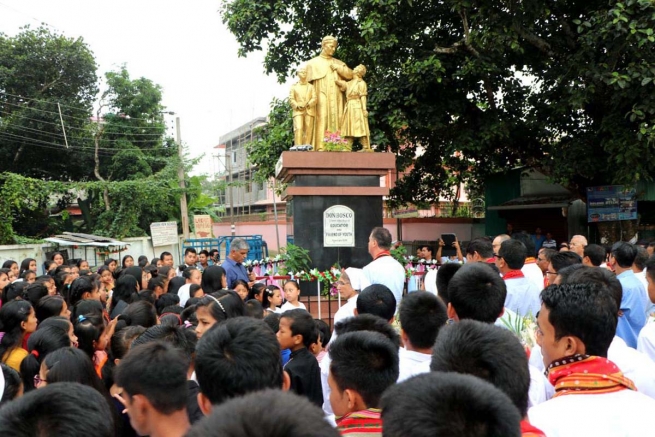 (ANS – Agartala) – On Sunday, October 27th, the Rector Major of the Salesians, Fr Ángel Fernández Artime, SDB, paid homage to the statue of Don Bosco that adorns one of the trijunctions in the capital city of Agartala. The brief function set the tone for what turned out to be a memorable evening that hundreds spent in the company of Don Bosco’s successor and Rector Major of the Salesians.

Fr Joseph Palamthattel (Sunny), Rector and Parish priest at Don Bosco Agartala, welcomed the Rector Major and gave a brief history of the statue. The statue of Don Bosco, a replica of the historic statue in Turin and Don Bosco Square Shillong, was erected at Bankumari trijunction in June 2011, a few days before the casket containing Don Bosco’s relics reached Agartala. The monument, inaugurated by Shri Jitendra Choudhury, a Cabinet Minister in the then ruling CPI(M) government of Tripura, was an acknowledgement of the services rendered by Don Bosco to the people of Tripura.

Then he met all the Salesians working in Tripura and Silchar, and underscored the need to ensure that the “poor are the beneficiaries of the services the Salesians render.” He called his conference to the Salesians “a very important meeting, perhaps, the most important among the many meetings lined up for me these days.” He expressed his happiness at meeting each one and congratulated everyone for the work being done. He had special words of appreciation for the Provincial and his council whose leadership, he said, the confreres too appreciate. He called INS, a “young province that still has the possibility of shaping its identity and destiny.”

The Rector Major said also, “Each Salesian contributes to what will become the history of the province. One must ensure that his contribution is something that enriches the history being written.” He then invited the Salesians to be creative in discerning the present day needs of the youth, and in responding to those needs.

The Rector Major was especially eloquent when he urged fellow Salesians to keep in mind that “the poor are the true subjects of Don Bosco’s charism.” Decrying the tendency to replace the poor with the middle class that can be sensed in some places, the Rector Major pointed out that “the middle class perhaps has other options, but the poor have only us. We cannot move away from them.”

On behalf of all Salesians present, Fr Paul Panachikal thanked the Rector Major for the sharing and for clearly articulating the direction our apostolate should take.

Finally, in the evening, Fr Ángel addressed the members of the Salesian Family of Tripura at Don Bosco Agartala on of 27th October. He also interacted with them and said he felt totally at home in their company. The gathering had members from Salesians of Don Bosco (SDB), Daughters of Mary Help of Christians (FMA), Missionary Sisters of Mary help of Christians (MSMHC), the Visitation Sisters of Don Bosco (VSDB), the Cooperators and Past Pupils.

More photos are available on ANSFlickr