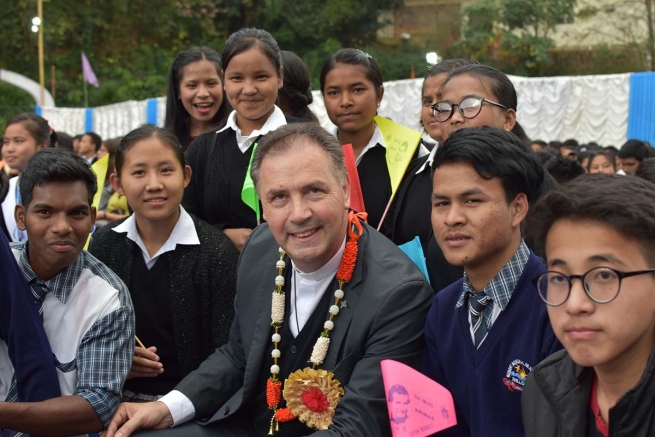 (ANS - Shillong) - The Rector Major's Animation Visit to the Shillong Province (INS), which closes today, 30 October, continued in recent days among festive meetings with the local population and fraternal moments with the Salesians of the Province.

After the stages experienced in Agartala, Fr Ángel Fernández Artime arrived in the afternoon of Monday 28 October at the Provincial House of Shillong, where there were about 500 people impatiently waiting to meet him, dressed in the area's typical tribal clothes. He received the official greeting of the Provincial, Fr Paul Olphindro Lyngkot, and followed with close attention the exhibition of the musical bands of the Salesian aspirantate and the choir of the novices of the Daughters of Mary Help of Christians. The welcome ceremony reached its epitome when the Rector Major reciprocated with songs, himself playing guitar and singing before everyone present.

Then, after a time dedicated to photos and spontaneous greetings with the cheering crowd, the Rector Major met with the Provincial Council, to which he explained the general situation of the Congregation and from which he received an overview of the current state of the Salesian INS.

Yesterday, Tuesday 29, accompanied by numerous Salesians, Fr Á.F. Artime joined the Salesian Theologate of the Sacred Heart, and celebrated Mass for the community. On the anniversary of the liturgical memorial of Blessed Michael Rua, the Rector Major recalled in his homily that the Congregation still needs Salesians who are as genuine and sincere as the First Successor of Don Bosco. And he also added that today's young people want to see in Salesians "God's tenderness".

Later in the morning, the Rector Major also visited Shillong's famous "Don Bosco Center for Indigenous Cultures" (DBCIC) Museum, which collects testimonies of the different cultures of the tribes of north-eastern India. He visited the various sections and admired the cultural testimonies exhibited within the vast museum, which develops over seven floors, and has also inaugurated its website.

The Successor of Don Bosco then met with all the Salesians in the Province: he reassured them about the state of vocations on a global level, but he also recalled the need to take care of personal accompaniment not only for young people but also for Salesians themselves. Finally he warned against individualistic tendencies, immaturity and clericalism and from the search for power within religious life.

The presentation of a new book by the Salesian Fr Johny Eapen marked the conclusion of the meeting.