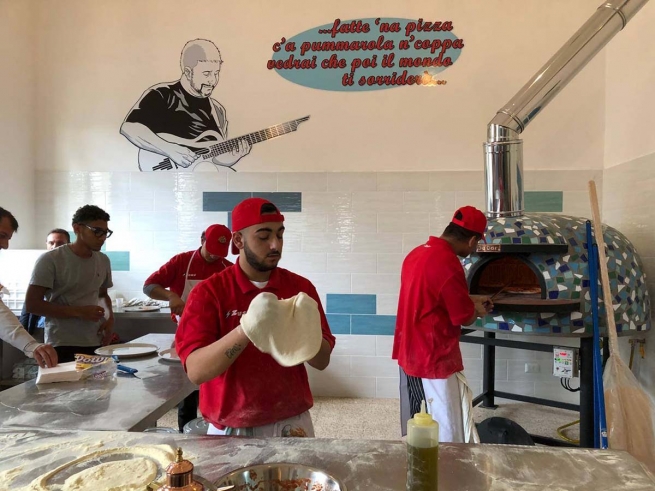 (ANS - Torre Annunziata) - Accompanying the youngest at risk by giving them attention, time for study and recreation; and then teaching them a trade to save these local youths from the underworld and give them a stable future. This is the meaning of the two new initiatives that are being launched today, Monday 4 November, by the Salesians of Torre Annunziata: the multi-purpose day center "Casa Valdocco", and the vocational training workshop for apprentice pizza-makers in "Pizzoratorio".

"Casa Valdocco" is a day care center accredited by Area N30 of Torre Annunziata, which can accommodate 30 children between 6 and 18 years of age. Minors will be followed by specialized educators and operators throughout the day until the evening when the children return home. The typical day begins with sharing meals, then time for study organized in a diversified manner according to various levels; workshops and sports, psychological support and family mediation then follow.

"With the 'Mani in Pasta' pizza-maker workshop, (hands in the dough) we want to teach a trade to all those children welcomed in our family homes or in the oratory who have had less from life," said Fr Antonio Carbone, the Salesian responsible for the project. An opportunity that will be addressed first to the thirty or so young people aged 14 to 21 who are already guests of the two communities 'Mamma Matilde' and 'Peppino Brancati'; over time, the program will expand to those boys who attend the oratory on a daily basis seeking formative opportunities. The students of the course, followed by a professional trainer, will obtain a qualification certificate recognized by the Campania region on graduating.

The workshop itself consists of 60 square meters set up in the Salesian oratory with a modern oven in the center. “We are in a territory where there are so many difficulties and the prospects for work and commitment are also difficult. Every day our goal is to take the young off the street. We will save them from clans, thanks to a gastronomic workshop that will teach them to cook and bake pizzas. And thanks to this qualification, they will be able to find an honest job."

Fundamental for the "Pizzoratorio" was the collaboration created in the planning phase with various pizzerias in the area for the job placement of young people, as well as the economic contribution of the "DON BOSCO NEL MONDO Foundation" and of "Salesians for Social APS". And the town's tradition was also a factor: Torre Annunziata was recently in the Guinness Book of World Records for having produced 10,893 thousand pizzas in just 14 hours!

The Salesians in Torre Annunziata have a past to remember, a present to live and a future to build.