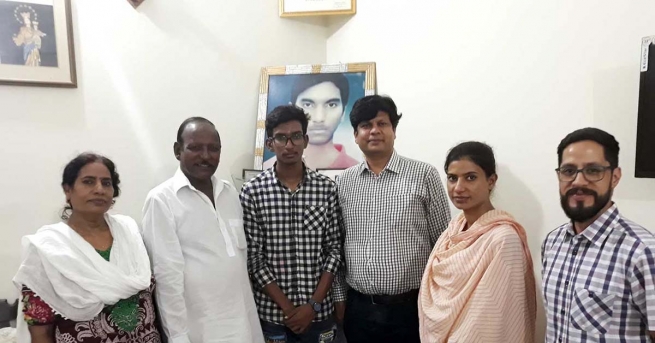 (ANS – Lahore) – Almost five years after the life sacrifice of Akash Bashir (1994 – 15 March 2015) –  the past pupil of the Lahore’s Don Bosco school who gave up his life to prevent a suicide bomber from provoking a massacre in the church of St John in Youhannabad on 15 March 2015 –  the Salesians, together with the local Church in Lahore, have begun to collect testimonials (a 16-question interview) for the possible cause of martyrdom. Until now, more than 20 people from his parish in Lahore, both Christians and Muslims, have contributed with their testimony.

The shining model of Akash Bashir continues to spread around the world. In just the last few months, Catholic TV crews from Poland, South Korea, Spain and Italy have visited Lahore and interviewed the witnesses - his family. Also for the next Lenten season 2020, the life witness of Akash has been chosen by the “Church In Need” as one of the six globally significant symbols of the persecuted Church.

The tomb at the small Catholic cemetery at Youhanabbad parish in Lahore was made with marble donated by a Muslim businessman. His figure highlights personal sacrifice, giving one's life for others! His family, his friends and his parishioners keep his memory very much alive.

What do you know about Akash Bashir's martyrdom?

Through his sacrifice so many people started to serve in the Church.

Akash had the desire to become a martyr, by sacrificing himself. Jesus fulfill this desire.

I knew Akash was a security man, I didn’t meet him personally, but he saved my family. Through that incident, me and my family relationship with Akash’s family have gained strength. Now our families have a very good relationship.

What was Akash Bashir's spiritual and prayer life like?

His spiritual prayer and prayer life were really good; he was always praying.

His prayer life was improving and improving every day. His spiritual life was strong. He liked to go to Church and listen to the word of God. The day of the blast, 15 March 2015, when we heard the sound of blast we ran towards the church and we saw the people injured. I saw Akash Bashir who was fallen on the ground in front of the church’s gate; I saw many wounds on his face and I came to know he faced the terrorist. “I will die but I will not let you enter into the church” were his last words to the terrorist.

Any miracle through the intercession of Akash Bashir?

Through his martyrdom, Akash Bashir saved many people, but the miracle is that he makes us all aware of the importance of life and family, he gave us a new light of wisdom… For me, the miracle performed was that day when the bomb blast came, many lives were saved through his sacrifice. Akash walked ahead of us and showed us the path to eternal life.

Prayer for the cause of martyrdom of Akash Bashir

especially to his family and the parish community of Youhannabad

You gave him a strong faith, unfailing hope and tireless zeal

to serve the Catholic community and lead others to Jesus.

Inspiration in service to others and selfless help.

Let our lives be a continuous praise of You,

who live and reign forever and ever.